Jack Perez is hardly a household name and MTV Studios is hardly a benchmark in quality entertainment, so to find out that they got together and made a Straight-To-TV ironic-comedy monster movie in the mid-2Ks is to fill your heart with low expectations. That the trailer is heavily focused on cameos by Carmen Electra and Adam West, and stars some generic, moody-heartthrob bloke you’ve never heard of is to possibly fill you with more inertia. But at Trash or Treasure we make a giant-bee line for that kind of thing, and this film reminds us why.

“It’s okay, I can smell the plot’s cheese from here.”

The plot of a timeless tale from throughout the ages: boy (Daniel Letterie) loses girl (Mary Elizabeth Winstead) because he’s a teenage jerk, boy’s sister (Chelan Simmons) enters him into a competition for his class to go on an MTV show, his class including his best friends (Casey Beddow and Joe MacLeod), the girl, and the girls dickhead new boyfriend (Chris Harrison), where he meets the highly attractive Carmen Electra ( Carmen Electra) and thinks he’s got a chance with her. Then the giant ants attack and take Carmen Electra to their volcano lair, the boy decides to show his worth by recusing her, and his ex becomes possessed by a magical amulet. Basically, what Shakespeare would have written if he knew what a mall and MTV Cribs were.

This is all, obviously, ridiculous and the people making the film (which is mostly Jack Perez, as he wrote and directed it) are fully aware of that so work it into the humour. They are also fully aware of the facade MTV creates, so are more than happy to show things behind the curtain and take a couple of comedic jabs at the reality of it all. But, probably most importantly, they are clearly also deep fans of the classic era of monster movies, as the film is perfectly happy to show off and play around with the cliches and conventions of the genre whilst treating them with the due reverence they deserve. 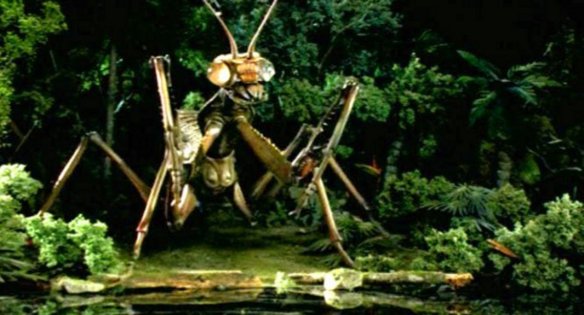 The monsters get billing in the credits, which is massively progressive for it’s time.

Simply put, the monster work here is incredible. This is a stop-motion and giant prop festival for the eyes, with minimal CGI use and a visual style that mixes late millennium with early Hollywood to great effect. The monsters we meet along the way are presented as scary, frightening, and convincing with a straight face and an invitation to enjoy the charms of them, and it works so incredibly well that you can happily get caught up in the adventure of it all. 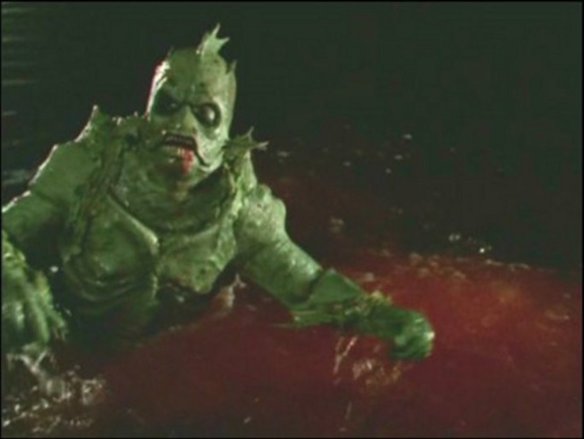 Similarly, the whole cast give convincing performances in the most ridiculous of manners. There are no winks to the camera because they assume the audience is smart enough to understand exactly what is going on. They play it straight, and universally very well, so that we can laugh our arses of when the rye observations and situational jokes come through, and then cheer at the risk faced and bravery shown by the very same people.

With just a few more bad career choices, she could have been a Scream Queen.

Carmen Electra needs a special mention here, as her role is a surprisingly progressive and real one. Nominally the damsel in distress, due to her kidnapping being the hook of the plot and her role as the attractive showgirl, the cliches are thrown out of the window as she is shown, without any slut-shaming, as having both public ‘sex-kitten performer’ and private ‘complex individual, because actual person’ personas. She becomes more interesting and real by showing just the slightest peek behind the curtain of her job, and that she can convincingly scream whilst being attacked by a 15-foot-wide rubber ant head.

At a very tight 120 minutes, this film does not muck around and the chances of you getting bored or lost in any of its plots are minimal. Similarly, you don’t need a knowledge of stop motion as the homages and references are handled as discreet nerd bonuses. You might need a willingness to get on board with the core concept, and to handle it being PG rated, but for anyone willing to go along for the rid it’s a delightful Treasure of a film.