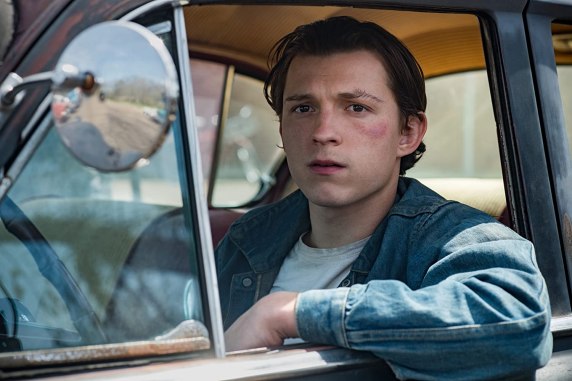 Continuing with its run of “it’s okay, if you like that sort of thing” films from big-name producers, Netflix has entered into the world of American Gothic with “The Devil All The Time”. Adapted from the book of the same name, and with its author Donald Ray Pollock acting as the narrator through its 138 minutes run-time, it follows the life paths of Willard Russell (Bill Skarsgård) and his son Arvin Russell (Tom Holland) as they deal with violence, death, and religion in ’40s, 50’s and 60’s Knockemstiff, Ohio. Intertwined with them are the various lives, challenges, and horrific murders of everyday rural America, resulting in a road trip through an Appalachian heart of darkness. Unfortunately, for all the wonderful scenery and charming locals, it never really ends up going anywhere.

The key to a psychological thriller is to have something to say about the psychologies of those involved in it, but The Devil All The Time dispenses with that and presents the acts of violence and random cruelty as a matter of course. People do strange, often un-foreshadowed, things in the name of faith, sex, and wilful brutality, but the why is never really looked into beyond an almost exhibitionist “this is what it was like in Rural America at that time”. The film’s investigation into the assorted murders, rapes, and crippling of its gaggle of characters run as deep as your average horror film. 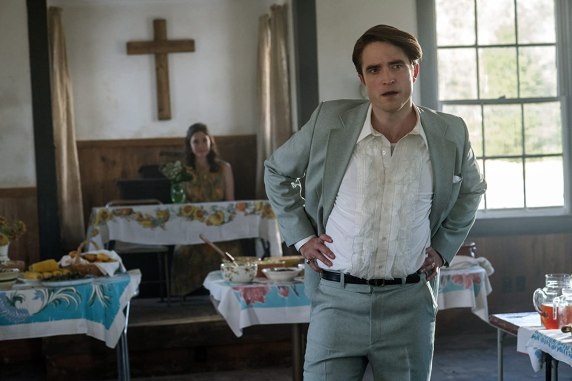 Whilst there is plenty of plot to go around, and it manages to keep an even and engaging pace throughout, things never get going beyond the assorted life stories being connective material between the next kill. It presents itself as observational, but the lack of any real insight into why things happen shifts it to the voyeuristic and nihilistic. As well as Willard and Arvin’s tale of generic poverty-unpleasantness, we have the serial killer Henderson’s (Jason Clarke and Riley Keough) providing sex-murders of random strangers, Sheriff Lee Bodecker (Sebastian Stan) being non-descriptively corrupt, the Reverend Preston Teagardin (Robert Pattinson) being the predictably sexually dodgy preacher and Roy Laferty (Harry Melling) being the predictably murderous dodgy preacher. All their lives intertwine in ways that justify them all bouncing around like eggs in a basket, but they all feel under-developed and convenient means to enact the next dark, unpleasant scene.

Obviously, this isn’t a problem in and of itself, because who doesn’t like a nicely done bit of folk horror and amoral titillation. But by the end, the viewer may feel short-changed because there are no really chunky scenes for the phenomenal ensemble to get their teeth into, nor do the makeup department ever get to go to town with the fake blood and gore. Not a single actor has a duff moment, every single shot looks perfect for what it’s trying to achieve, and there are countless moments of shock, pathos, and quiet, realistic, humanity. But as a whole it just plods along, managing to produce a whole that is lesser than its constituent parts. They all get an introduction and a conclusion, but there is precious little second act for anything.

Other than the exploitative “life was awful here in the past” message, nothing is ever really explored in a satisfying way. Other than being spoon-fed the occasionally blindingly obvious bit of inner turmoil by The Narrator, or having him throw in the exposition to solve an otherwise intriguing twist, people keep everything below the surface and unexplained. There are no recurring themes, visual or emotional, to bind the lives of the protagonists together to suggest they had any choices in their paths. But a unified theme or journey is hinted at so often that “hey, shit happens” is almost as big a short-change to the audience as the trailer was about Pattinson’s involvement in the film.

But for all that, if any film could personify “not angry, just disappointed” then this would be it. It is, script aside, an incredibly produced and performed film. Individual scenes will stay with you for a long time, and not just because of the escalating unpleasantness. You can see quite clearly that so much care, attention, and love has been put into all areas of this work. If the positives catche your eye enough, it’s probably got some re-watchability as well; either because you want to find the hidden motifs, or just really liked a scene. Just accept that this is the poshest, highest caliber cast-list slasher film ever made, and make peace of that between yourself and your God.