Due to the hole in the market left by broadcast media no longer running Halloween horror marathons, over the last couple of years Netflix has regularly dropped spooky movies under its Originals brand at the start of October. It started around 2016 with I Am the Pretty Thing That Lives in the House, a well-received, high-brow gothic horror. Since then, their annual offering has switched between high-brow (Apostle) and gory-camp (The Babysitter), but has constantly focused on the adult audiences. This year, with Osmany Rodriguez as writer and director, they have brought us something a lot more family-friendly in the shape of Vampires vs. the Bronx.

The central premise of the film is entirely what’s presented in the trailer, just with a bit less horror and a lot more naturalistic comedy. Somewhere in The Bronx, a redevelopment company called Murnau Enterprises are buying up whatever property they can, bringing the spectre of gentrification and whiteness to an extensively working-class Black and Latinx community. The main hero of story, Miguel (Jaden Michael) is trying to hold a block-party to save the local bodega from being purchased, and from there he and his friends Bobby (Gerald Jones III) and Luis (Gregory Diaz IV) get caught up fighting blood-suckers fronted by Adam David Thompson. Things get further complicated by the local community and authorities not believing in the Living Dead, and the criminal element getting involved in an organic and interesting manner.

If you want to boil the plot down to its constituent parts, then it’s a fairly by-the-numbers story of fang-banging with as much blood thrown around as you can whilst still holding a twelve rating. But that is pointlessly reductive and like saying Dracula was a story about estate agents needing to know their customers better. What we have here are two very carefully observed and realised main themes that, when brought to the forefront like they are in this film, add a spin to the traditional/cliched horror film. We also have enough ups and downs within the plot for me to not want to give out much more plot than you’ll have going in.

Firstly, we have a level headed, and ground floor, view of (what I can only assume, from my position of ignorance) is a fairly average life experience within the Bronx area. Things are not overly nice; things are not overly nasty. Life is hard, but people smile. Other than a few tweaks, such as the inevitable impacts of blood-sucking creatures of the night making their home there, things feel real and are clearly steeped in a lived experience. This in itself is a change from a trend in modern horror to craft a significantly unreal and hyper-frightening, almost fetishizing survivalist, version of the world.

The Bronx is somewhere people would actually want to live, but equally one people would want to leave for very mundane reasons. People’s problems are workaday, people’s solutions are straight-forward and reasoned. So, when the supernatural element comes in, people react to it in a fitting and believable manner. This includes one of disbelief, because vampires aren’t real, and the other being a call to arms, because there’s so much information about vampires in pop culture. Both are acceptable as grounded reactions. Even the tipping points from dismissal to acceptance of the walking dead are bang on, being neither too easily won or so drawn out as to you thinking characters have lost their minds for not accepting the horror hovering above them.

The second factor that adds so much to the film is the friendship between the three main characters. It has to be one of the single best representations of adolescent male relationships and “coming of age” that I’ve seen in any form for years. The trio are living their lives; coming to term with adult choices and the start of hormonal adolescence, whilst holding on to being the kids that they are. They don’t suddenly adult-up when exposed to the supernatural or the problems of the real world, they act like kids trying to fight vampires and real-world darkness when the adults won’t believe them. They don’t transform, they become more themselves.

All this is probably helped by the three main actors being great performers, who I can only compare to a modernised take on Sam and the Frog Brothers. This is due to the chemistry and the bravado between the characters, as well as the tone of the film owing a debt to The Lost Boys. Some commentators have name-checked Attack the Block as a reference point, but I don’t see it because Vampires vs. the Bronx isn’t an invasion movie. I think people are just calling that because there are a lot of political and social commentary in this film. Which is the norm for vampire stories, going all the way back to Dracula and its metaphors for xenophobia, homophobia, and fawning over Henry Irving, and with American fantasy films outside of the white experience, such as The Brother from Another Planet and Get Out.

If there are any fallings, it’s in the final act when the ambition of the director goes beyond the technical budget and the film’s content is held back by the apparent wish to keep things family-friendly. A couple of moments build up but never pay off as well as they should do and some of the effects look shoddy. However, the overall scenes keep on landing again and again. The twists and the turns are all well built-up and well delivered, helped by a right-sized and highly skilled supporting cast. No ideas are left under-explored, and things aren’t tied up too tightly as for everything to be perfect at the end, which adds another delicious drop of realism to the proceedings. 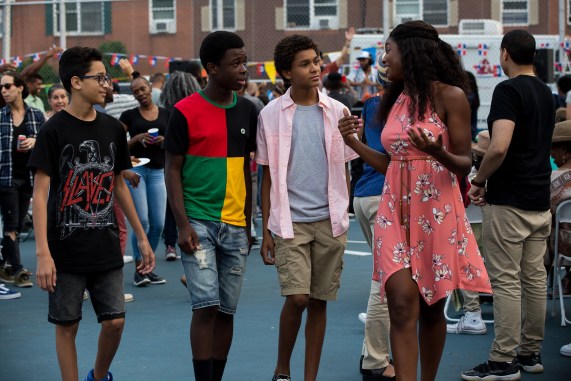 Whilst the rating may deter some stubborn members of the horror and vampire fraternity, this is a decent addition to both communities. Vampires vs. the Bronx tries to do something new by the simple, but highly effective, techniques of showing us a standard scenario through another set of eyes. Due to his back catalogue, I don’t see Osmany Rodriguez becoming the next Jordan Peele, But I would happily look forward to him taking on another “done to death” horror story and seeing him bring it to life in such a classy manner as in this film.