Before being corrupted by Hollywood, and forever tainted by the evil of production budgets, Peter Jackson had a highly respectable career in New Zealand cinema as the foremost auteur of splatter comedy. Bad Taste, with it’s exploding sheep was his breakthrough moment, and Braindead arguably the highlights of his filmography and unarguably the bloodiest film ever at that time. But it’s his adventure into the world of puppetry that is “Meet The Feebles” that got run through the Trash or Treasure grinder this time, because what we really need right now is a meanspirited laugh and a hippo with a machine gun.

The first thing to establish is that this is an irredeemably juvenile film, with its whole mission being to shock your sensibilities and offend any sense of good taste you may have. Essentially a denigration and perversion of The Muppets, it’s schoolyard humour of the highest order with sex, violence, and a wide array of bodily fluids thrown around with joyful abandon by the anthropomorphised creatures found within. Even today it’s still able to stun and nauseate, in the best possible way, the most brazen of watchers. So be warned; The New Zealand Film Commission put up two-thirds of the money for this, then took their name off the credits when they saw the final results.

With that out of the way, it’s time to start the show! And the show is The Fabulous Feebles Variety Hour, a collection of acts and performances, staged in a rickety old theatre, that is twelve hours away from its first TV broadcast. The director, Sebastian the Fox, is at the end of his tether because it’s all going to hell: Heidi the Hippo (the show’s star) is lovesick due to the philandering of Bletch the Walrus (the show’s producer) with Samantha the Cat (the show’s shameless hussy), Wynard the knife-throwing crocodile is suffering heroin withdrawals, Harry the Hare has picked up an STD, and all of the… well, whatever they are that Sid the Elephant has trained for his act just got squashed by a runaway barrel backstage because he was busy running away from a chicken he once slept with.

And that’s about half the plotlines happening, because this is an utterly unrelenting film with a gag density comparable to the mighty Airplane!. There’s drug dealing, porn filming, paternity cases and so much more going on, all with a large on-screen body-count. If you were to remove the comedy and puppets, and ignore the multiple B-plots, you would still have three classic theatre stories running through it; the troubled production, the fading Star being replaced, and the new arrivals’ inevitable love-story being blocked by a sleazy, snuff-movie-making, drug-smuggling rat called Trevor. There’s also a 10 minute long Vietnam war flashback, complete with chipmunk Viet Cong and extensive Deer Hunter references. Impressively for a full-blown combat sequence, it’s neither the most violent or bloody portion of the film.

To top off the narrative overload, almost everyone in it is either terrible or incompetent, and often both. Even the characters that we are supposed to be rooting for are flawed, albeit in a slightly more understandable manner. There is just an unstoppable wave of negativity, greed, and outright nastiness running through every moment, and whilst it’s all ridiculously over-the-top there is just enough regular villainous motivation to keep motives and intents recognisable, grounded, and thus, somehow, worse. We’re used to The Big Time Producer exploiting The New and Naive Talent, so having the Walrus (former) eat the Guppy (latter) is just a logical, mortifying, and hilarious inevitability. 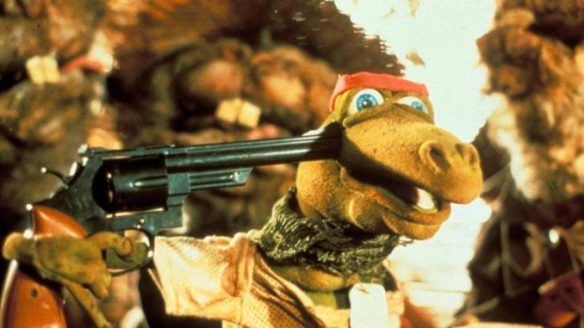 That also leads to the genuine genius of the film, which is the outright inventiveness of the corruption of expectations. As said, at its core is a very recognisable and well-written, clichéd plot. This acts as a framework to keep everything on track, as well as a means to create enough scenes to parody at a breakneck pace, with the divergence happening through exaggeration of behaviour, rather than massive deviation from the form. You will never lose your place in the plot or fail to understand why things are happening, even as you are reeling from what you just saw or heard being so revoltingly excessive. And once you get into the pace and mindset of it, a second layer of comedy is encountered where you just accept this for what they are; going “well, yes. Of course, that happened” to the most outlandish of occurrences whilst cupping your head in your hand.

Away from the vulgarity, there is also genuine craftsmanship on display. The puppetry is superb, landing in just the right part of the Uncanny Valley to be its own consistent and believable unreality. There are also a number of wonderfully performed songs for you to enjoy, and a couple for you to baulk at the lyrics of. The sets are phenomenal, adding a real-world solidity to all the fuzzy felt, and the sound FX are visceral to a level most slasher films would weep to have. Add in a script and editing style that is 100% focused on constantly getting to the meat of each scene, and it’s a profoundly competent recreation of a production going to hell in a handbasket.

If this sounds like unending praise then that’s because this is what the film deserves, as it is the ultimate demonstration of what it can be. Avenue Q and The Happytime Murders pale in comparison for transgression and “gross out”, being the diet-cola and a shot of vodka to the bucket of Monster energy drink, full leaded petrol, and borax that is this film. Obviously, such a definite product means it won’t be to everyone’s tastes. But that’s part of the fun and adds to the frisson of watching it. It’s not trying to be redeemable in any way, it succeeds on being what it is and that’s the blackest of humour based on slaughtering the most sacred of childhood cows.