Before I get into this review, I want to make a couple of things very clear.

So, with that in mind, here’s how I feel after 221 minutes of having my mind hammered into stunned silence by some of the most high-gloss mediocrity I’ve come across.

I had low expectations going into this, and they got matched at almost every step of the way. Set on the Greek island of Prettyandsunny, but without anyone looking even slightly Greek getting a speaking part, Pretty Girl is getting married there to Pretty Boy because Meryl Streep has a hotel on the island. As Pretty Girl has just found out her mom was a total player back in the day, she’s done the very sensible thing of inviting the three men who could be her dad to turn up on the day of the wedding, With Hilarious Consequences!

Cue lots of singing and dancing as oldies get to relive their youth and the actual youths go through the kind of youth that the target audience wishes they had had. Streep’s friends turn up and relive their days as a dodgy ABBA cover band, the potential fathers turn up and fail to explain how they’ve gone from societal misfits to sensible people with important jobs and dad-bods, and the kids panic over getting married because what sort of lunatic invites this much drama to their own wedding?!

From time to time everyone bursts into an ABBA song that almost, but not quite, fits into the narrative, and has a jolly heartfelt moment with lots of facial expressions. However, because the clock is ticking and they want to give the audience as many doses of “ooh, I remember that!” as they can, all the songs are chopped down into bitesized reminiscence-chunklets. This was probably to avoid the chorus getting overused or to remove lines that don’t fit the moment, but I don’t quite know what sort of ABBA fan would object to hearing more ABBA, so even I ended up feeling short changed. Also ending up on the cutting room floor were large chunks of the plot, including why the stag party decides to do a Lord Of The Flies raid of the hen party and Colin Firth’s sudden announcement of being gay with zero lead-in. On the plus side, these insane incidents provide the only surprises in the whole script. 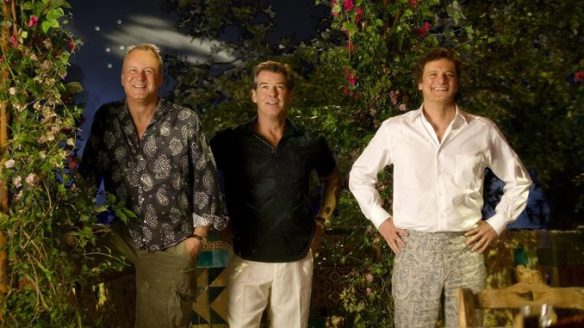 Still, most people will be there for the sing-along so it’s all grist to the mill as all that you hear are the hits delivered in “a variety of styles”. These range from Streep hitting every note going, including a couple you didn’t know existed, to Pierce Brosnan sounding like a failed experiment in synthesising the human voice. Generally though, everyone is at a consistent “that’ll do” level, which is probably intentional as it means the average audience member will feel that they can hold their own against the cast. 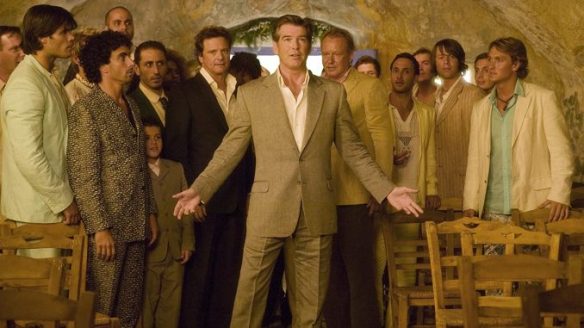 Other nice touches include everyone being that type of generally pleasant which happens when people without a care in the world turn up to a wedding, and an overall sex-positive vibe to what could have been a slut-shaming slamdown. Admittedly I’m confused as to why not one of the four people involved with Pretty Girl’s conception had heard of contraception, but I accept that it all happened somewhere between the mid 70’s and late 80s so it had probably not been invented by then. There’s also a bit of a subplot about Christine Baranski being seduced by someone a third of her age, but as the set up for that also disappeared and she’s a rich divorcee, it ends up being less Shirley Valentine and more the setup to a Murder, She Wrote. 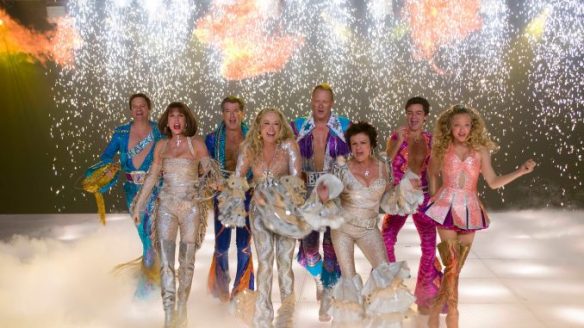 Eventually, after an hour and three quarters that felt like chewing through an ice-cream sundae made of pure sugar, it ended. Well, kind of. It then broke into a singalong of Waterloo, because that’s what people turned up for and the writers couldn’t get it into the main script. Which pretty much sums the whole thing up, as it gives people what they want but without any grace, subtlety, or real drama.

I should have been immune to the pain by this point, as I was the best part of the way through some 3-litre bottles of Lambrini, but the sequel still managed to disappoint me by being even more tepid. Freed from the constraints of the stage show, and buoyant on the fact that it knew it had an audience that would throw money at whatever ideas it went for, it should have been the more exciting one of the two. However, it ended up being disappointingly dull.

It’s a year after Meryl Streep died and Pretty Girl is about to open the hotel she inherited, but she’s annoyed because only one of her dads can make it, and Pretty Boy is stuck in New York trying to learn how to run the hotel of her dreams. To help through the stress of having to keep all the islanders away from the microphone, we get an exciting series of flashbacks about how the first story got set up. Cue tales of the youthful three ladies graduating head of class in Oxford in Advanced Libertine Studies, shacking-up with young Pierce Brosnan in Paris, and then ending up on Prettyandsunny Island because it’s not like Italy and a thousand miles are in between them. 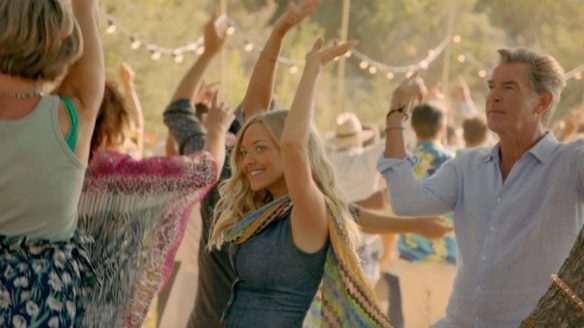 Hope was presented in the form of the song Waterloo, both because young Brosnan doesn’t sound like a Speak-and-Spell with pretensions of grandeur, and because the director realises this is a movie! So begins a rather delightful dance number that could never work on stage and an air of dreamlike wonder, as everyone in the café joins in like they’re in some 80s interpretive dance exhibit. It’s exciting, it’s emotional, it’s vivid, and then it bogs off because other than a few shots in the hotel with people from different time frames entering and exiting the same rooms, that’s as adventurous as the movie gets!

Meanwhile, away with the other two dads tromping through “(How) One-Of-Us (Impregnated Your Mother)”, we are back in the present; everyone turns up at the hotel because you just know there’s going to be an amazing dance number at the end where everything works out fine. Tension is non-existent, other than what will be sung next, and Andy Garcia turns up as a Mexican hotel manager because no one in Greece could possibly do the job. Yes, that really annoyed me. A couple of Greek citizens are present, but they’re either there to die for the emotional development of the foreigners, or as a bit of comic relief.

Cher also turns up as the much-foreshadowed evil Grandmother, in what can only be described as the most pointless bit of casting going. She goes from Convenient Sachet Of Hitler, to Emotional Growth Guru within 3 minutes of screen time, telephones in a bit of a tune (okay; “for Cher”, which is obviously quite good), and then shags the manager because this world is both tiny and constantly gagging for it. To add to the indignity, Cher gets upstaged by Meryl appearing from the dead to do the big emotional number to close the show. A bold flex from the casting director, but a crappy story arc in a film that already suffers from telegraphing everything and then calling you two minutes before it arrives to make sure you’re still in.

Obviously, people who liked the original are going to like this as well, much like junkies always have room for a bit more heroin if you offer it to them. By its own rules, it’s probably quite good, and it racked in the cash at the box office, but if you sat through movie one and thought it was a bit naff then don’t expect movie two to be anything other than the lightly reheated leftover songs. It wasn’t agony to watch, it was just everything you expect and not one idea more. I won’t be surprised if a third instalment is squatted out for 2028, and frankly, the audience deserves everything it gets from it.