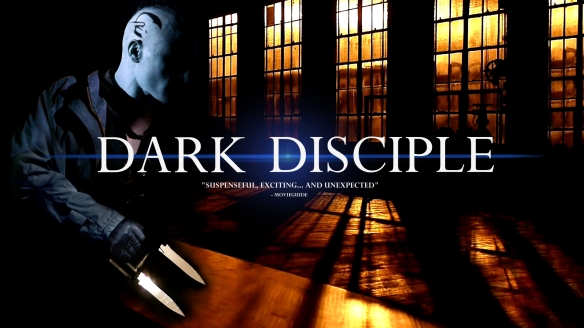 Allan Caggiano, who by his own admission has no formal training, set out with a four-person production crew to make a movie and for that I applaud him. He also said that “reviews (even the harsh ones) are greatly appreciated” so on the off change he gets to read this I hope he doesn’t think I’m being unfair with what’s about to be said. Making any kind of film is a soul-breaking task, and at the very least he brought into the world something that a group of us spent a pleasant hour and a half watching.

“Captain, can I come home yet? It’s dark and I’m scared”

So, as you’ve probably imagined, this isn’t going to be the most positive of reviews on this site. Unlike on IMBD, where there are several – shall we say, “surprisingly favorable”?? – 10/10 scores with quite poetic descriptions of what was on the screen; which is fine, this will have taken a lot of personal investment and getting your mates to hype up a thing you’re proud of is perfectly understandable. However, I want to say that there is a bunch of good in this film and that hopefully pointing out the not-so-good will be markers for the next effort.

“Okay, but if I see anchovies I’m going to start shooting”

One thing to note is that this film looks good. A lot of effort went into the shots, the composition, and the editing. It has a consistent visual style which shows a lot of thought went into what’s on screen, and when you’re filming at a range of locations, both inside and out, that’s an accomplishment. As a viewer, it keeps you locked into the tone of the piece and helps with the pacing. It also looks surprisingly beautiful for a film set mostly in an abandoned factory facility.

The other big positive is that all the fight scenes are well realised and look far better than you’d expect. They aren’t as spectacular or fluid as a high-budget offering, but they are slick, kinetic, and have a lot of wince-inducing moments of overkill that don’t slow things down. That’s important in a film like this, as you want to get in with the “eww” inducing effect and then get on to the next bit before the flow of the fight is lost and people have enough time to really look at how the effect was done. The back-breaker moment was especially horrible, so congrats to whoever pulled that stunt off, and the Disciples weapons were on screen just long enough not to notice all the tape.

“I thought you said you’d cleaned your room?”

Unfortunately, these sequences are both too short and too few to keep the movie going, and it’s in the writing that we see Caggiano’s weaknesses. Before you get to the issue of dull lines, nonsensical decisions, the extensive use of voiceover, and at least two false starts to the real story, there is the focus on the dull bit of what’s going on.
We get to see Officer Bloke (Allan Cagguiano) investigate a serial killer and recovering from the death of his family, which is pretty “been there, done that” stuff. Will he recover from his trauma and beat the bad guy? Yes, once we’ve pieced together that that’s what’s going on it’s all too much of an inevitability (although anyone who predicted a razorblade ball tennis in the montage is lying). But in the background, there is The Dark Disciple (Ti Cassiani), who’s been brought in as an enforcer by the local smuggling ring but appears to be building an army of homeless goth kids for some sinister purpose. Had the priority of the stories been switched we could have been onto a winner here.

“My knees are going to suffer for this brooding”

But they weren’t, and a number of side plots that never really go anywhere or have enough meat to them to be interesting “slice of life” stories are used to fill in the gaps of the run time. Lots of tension and high drama are talked about, but it’s never shown. There are just a bunch of what often feels like unconnected scenes that get run through their paces by a perfectly adequate cast, but no one really gets to shine, and the over-promising brings down the reality of what’s going on. Even Caggiano seems restrained in his own movie, although their physical transformation near the end is noteworthy.

Had there been more work on the script, stripping out the extraneous parts and putting more commitment to the central story and maybe one or two side plots, this could have edged into Treasure territory. Unfortunately, for all the good effort that’s visible on the screen the extensive tedium overrides the good moments so for the average viewer it will be Trash. Those interested in cinema might get something from watching it, partly to see what can be done on a budget but mostly as a mental exercise on would have been changed.

NB: The original title was “Valour Rising”, which is workable but clunky. Additionally, the main poster quote is from the founder of Movie Guide, which “reviews movies and television programs from a Christian perspective” and says of Valour Rising “it has some very positive evangelistic elements” (as well as spotting the same broad problems that are mentioned above). Personally I couldn’t spot any of them in the film, so don’t let the religous element put you off of watching this is you fancy giving it a swing as it’s pretty subtily coded in there.