Chekov said “The role of the artist is to ask questions, not answer them” so Scott Jeffery (writer and co-director) has produced some of the purest art available because I can’t think of a single one of the 83 minutes of this movie in which I wasn’t going “what the fuck?” at the screen.

The questions included: Why is a town in England populated exclusively by Americans? How come no one just runs away from the six-foot-tall bat creature? Why is there a katana on the altar of an abandoned Anglican church?* Why has a rural American girl traveled the Atlantic to lose her virginity to two rural American creeps in a house that was closed due to a giant radioactive spill? And, finally, why can’t I stop watching the obvious nonsense?

“And how long has the tooth been hurting?”

Some of it’s down to the acting, in an incredibly oblique manner. The cast is made up of a lot of people you’ve never heard of but who try their best to mumble their way through the trite dialogue. Nothing said is especially inspiring or insightful, and it mostly sits at the junction of “naturalistic” and “mumbled”. Then the giant monster turns up and they act as scared, stunned, and stupid as we would in that situation (even if we wouldn’t want to admit it). Megan Purvis does an especially good job of wandering around, vacant of stare and bugged of eye, failing to deal with or connect with anything as her father’s brains are splattered all over her face.

Before you get your hopes up; don’t think this is an effects movie. There are a couple of sequences (such as the dad’s head blowing up, which is the best-exploding head sequence I’ve seen for ages) that are wonderful. But the bulk of it is very basic though, and the big monster would be laughed off a Doctor Who set. The lighting is bland to catastrophic, with a lot of continuity errors so that it’s impossible to know what time it’s supposed to be, and the shots themselves are basic to a fault.

Yet, somehow, it keeps your attention and just about keeps you watching. There are enough twists and turns to counter the ridiculous contrivance of the situation, and enough “yeah, I’d be that crap” moments of honesty to keep you engaged with the characters (thin as they are). There are some very nice and inventive sequences, especially the ones showing quite how mind-destroying being in such a situation would be, and just enough standard horror moments to hold you in close enough for the tight editing to slip the whole of the film past you. 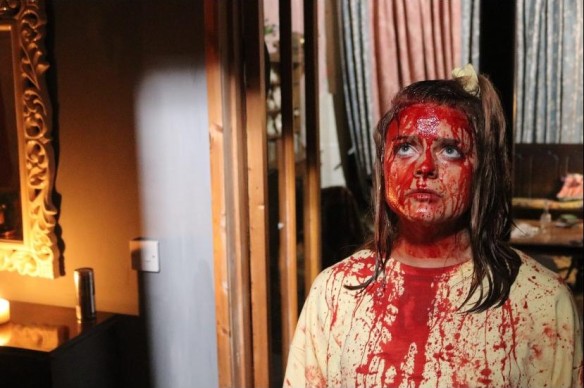 It’s not the most entertaining film I’ve seen, and it’s far from the best. It also fails to deliver on its promise of aliens, so we can assume that was just marketing bullshit pretending to be subtext. But it’s not as bad as its current 2/10 IMDB rating makes out on any level. The blandness of the characters and the sparseness of exposition somehow works, making it a kitchen-sink-drama of a horror upfront even as it goes incoherently crazy in the background. It is watchable, it has got highlights that keep you entertained, and it was (somehow) worth it, so that gets it a Treasure rating.

*Chekov would have been fine with it being there, as it goes off in spectacular fashion