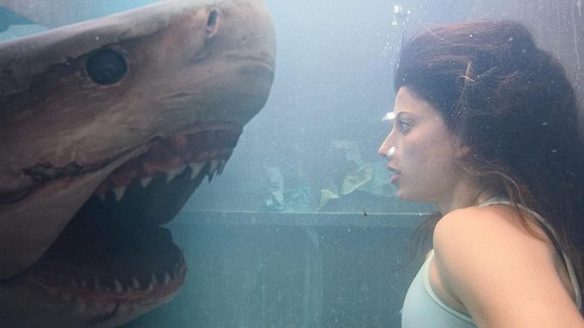 The sequel to the 2018 Deep Blue Sea 2 that few remember, which itself was a sequel to the 1999 Deep Blue Sea that many remember as being about genetically engineered killer sharks, is out on disc, and it’s time for everyone to quietly scoff at the silliness of the idea just like they have for the last 20 years. Inevitably people will chortle “It’s never going to be as good as Jaws”, because apparently 1975 was when “scary things in the water” films hit their absolute zenith, never to return. And, yes, if you want to compare it to one of the most perfectly crafted thriller movies ever put on the big screen, then it won’t stand up to it. But that’s because this is a slasher film, a totally different beast (as it were), and it’s playing, and winning, by a very different set of rules.

The first rule of a slasher is to gather all your victims into a location that’s cut off from the rest of the world; in this case, it’s the remote and half-flooded island of “Little Happy” – somewhere out in the Indian Ocean. It’s the home to a small research team, headed up by Dr. Emma Collins (Tania Raymonde) and staffed by a multicultural collection of people you can’t wait to see injured because they’re all bright-eyed, sexy young things. They’re out there doing complicated/improbable science, and we know it’s all to help save the world from the impending evil of climate change because that gets mentioned every two minutes. So, if you like, you can add “idealistic and hopeful” to their list of crimes. They also have a pet wild shark, which firmly establishes that any and all science you know of can very firmly go and do one if it gets in the way of the plot.

Turning up after the first set of really quite lovely underwater travelogue sequences is the HMS Plot Device and its captain Dr. Richard Lowell (Nathaniel Buzolic). He’s there to bring everyone fully up to speed with what happened in the prior films, to have had some vague romantic history with Dr Collins, and to explain that there are three killer sharks coming to do some quite serious killing. Alongside him is Lucas (Bran Foster), and his surly crew of dodgy pseudo-military types, who provide more bodies to die and Chekov’s Explosive-Harpoon-Tips-That-Will-Sink-The-Island. Will scientific integrity and big-pharma aggression co-exist and work together for mutual benefit over the remaining 80 minutes? No, obviously not. It would be an awful waste of time if it did.

And finally, the sharks arrive to get down to the serious business of being deadly to anything that even thinks of putting its toes in the water. There is some scientific waffle as to why they are so killy, but just like with Michael Myers you know that the real reason is because it’ll be fun to watch them do it. They are the boogy-triplets, and they will go around like the supernatural forces of death that they are. They even have their own Evil Dead eye-camera shots to help them be more scary, along with the ability to teleport to wherever will get the biggest jump-scare and some wonderfully detailed underwater gore. It would be hard to say that they have a personality, but their presence carries as much weight as the bloke in a mask with a knife from a myriad of lesser films.

The only thing not taken from the classic slasher routine is the sex, although there is a romantic pre-coupling that makes you think “They’re Dead!” in a knowing manner. The lack of these cheap thrills is lightly made up for via the innate and equal opportunity of practically everyone being in good shape whilst wearing either beach or swimwear. The film also mostly ditching the overused “youthful sex equals punishment death” trope, which means you aren’t as clued up on who will be eaten, and when. It’s a small change, done well, and added with all the others manages to bump the whole affair up a notch.

One element from the horror handbook that wasn’t skimped on is The Slasher’s Lair, and choosing the ocean as that haunted house makes for some exciting viewing. It’s all helped by some fantastic cinematography, along with a deliberate change in shooting style as the story progresses. In the first portion, the ocean is a colourful, inviting and exciting place, teaming with life and opportunity for discovery. Gradually, as the stakes and kill count get higher, it becomes an alien environment where man is at significant disadvantage even when loaded up with the finest of technological toys. By the end of the film, it’s a murky, frightening place that humans can’t see into and is filled with large mouths holding excessive teeth. To make it worse, even being out of the water won’t save you, as the killers can jump to head height…

Whilst the plot won’t win any prizes for being ultra-imaginative or highly unpredictable, it does have some excellent moments and will keep you on the edge of your seat once things get rolling. There is one stand-out sequence that is the perfect balance of expectation blind-siding with gross-out effects, but you’ll have to watch it to find out. It also has enough moderately-not-too-telegraphed twists to keep both you interested and the mayhem rolling. It’s as complicated as it needs to be, never having you worry beyond where the next tick of the body count will come from. 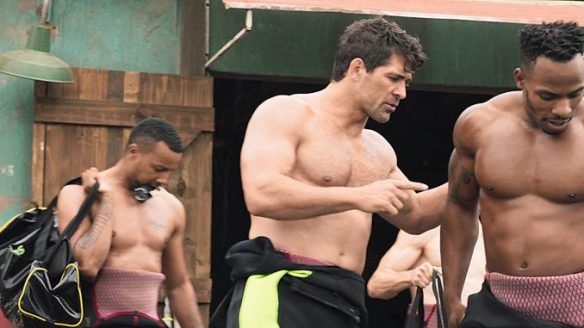 Even the acting is pretty solid, with everyone giving the best they can with a fairly exposition-focused script. No one is bad at what they do, and any frustration you may feel comes from the characters themselves. A particularly egregious example of this is Nathaniel telling Tania to run when she’s already doing so at top speed, which is an aggravating and somewhat out-of-character bit of mansplaining towards the star of the show. But beyond that, it’s all good, with not too many clichés given out to them and even a couple of performances that make you not want the character to become chum.

Will there be a Deep Blue Sea 4? Judging from this, it’s quite possible, as there is a lot of fun to be had with the concept and the makers are certainly willing to try new things. It’s 99 minutes runtime went sailing by, with no lag points or urge to yell “get on with it!”, and that is always a sign of quality in genre entertainment. There is enough untapped potential in the survivors for them to go another round, and the basic concept of people being stalked by hyper-sharks will always be intriguing to watch.