The chances are that, based purely on the title of this film, you’ve already made up your mind if you are interested in this film or not, as no one comes up with “Humanoids from the Deep” if they want to make things enigmatic and surprising. Names like that are meant to evoke a certain set of feelings, much like how these kinds of films are designed to evoke a set of emotions whilst watching them. It’s not meant to be smart; it’s meant to be an obvious signal of a specific kind of entertainment. It pretty much screams “this will be puerile and base, in the most amazing of ways!” and then holds out an open can of beer and a smoke to entice you in. The good news is that this film delivers on those promises, the only problem is that it’s intercut with two other films that manage to do both more and less.

The main film is a fairly rudimentary monster movie that punches way above its budget and production skills. It’s the late 70s at Lake Somewhereorother, USA Town, and strange things are happening. People are going missing, dogs are being eaten, and the womenfolk are being kidnapped. Why? Well, because the strange fish things are marauding, as is the tradition of these newly formed subhuman peoples. So, the people of Anytown hold the traditional meeting where one hero and one scientist tell them what’s happening and everyone ignores it. The hero and the scientist get more and more proof whilst more and more bodies rack up, and the whole thing gets solved by having a large festival, so the humanoids can come over to do a spot of third act massacaring. A couple more deaths, a bit of fire, people running scared, hero saves the day by doing what the scientist said 30 minutes ago; sorted. 80 minutes of tension, gore, monster suits, and horror.

The next film that got blended in is a fairly progressive bit of enlightened storytelling on the ills of man. You have the hero from the main film being stuck between wanting to respect the ecological concerns of the Native Americans and the economic realities of fishing the lake. You have Johnny Eagle, trying to play by The White Man’s Law™ whilst facing institutionalised racism. There’s Dr. Susan Drake, battling against sexism and the wishes of her own employer to cover up their involvement in the creation of the Humanoid. And, finally, you have Hank the local racist arsehead who is always busy being racist all over the place. It’s a surprisingly heady stew of the kind of little contradictions that make real life hard, other than the sledgehammer bits of Hank the Racist just being unpleasant at every moment he can find. It’s (mostly) subtle, it’s evocative of the era, it’s maybe 20 minutes of the whole thing, and it’s probably more the film the director Barbara Peeters wanted to make before she lost control of it mid production.

The final film is the one Roger Corman made after booting Peeters, and it’s basically nothing but highly unsexy sex scenes. A lot of it is just random “kids getting frisky before dying” standard nudity and gropeage, but then there are the fish creature rape scenes. Fundamentally, these are protracted scenes involving naked women screaming in terror whilst being rolled on by the Humanoids, often after having been chased and thrown to the ground, and that brutality can be upsetting. However, the creatures are well lit and visible, and when the “quality” of the costumes combine with about five gallons of goop it looks like a Doctor Who special effect run wild. I fall out of the moment so much that I end up being bemused as to why anyone thought it would be a good thing to add these scenes into the film, rather than shocked or horrified. In a similar vein, there is the Voyeur Woman On The Beach who appears to be there on an overcast day to sketch some birds and really, really obviously watch young couples make out on the shoreline. It may have been an attempt at a bit of frisson, but just started out as creepy and ended at unintentionally amusing. And then you have the sex scene with the ventriloquist, their lover, their dummy, and splinter jokes. Yeah. 100% Nightmare Fuel. Especially as the dummy randomly appears to be possessed as a throw away post coitus-interruptus-by-murderous gag. 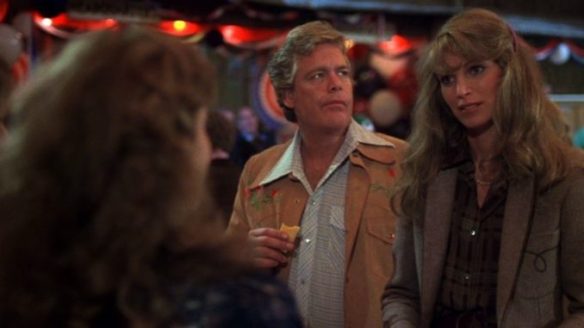 As you can imagine, all this in one sitting makes for a pretty disjointed and mis-paced film. The differences in visuals during the Corman added sections also don’t help, as they end up looking even more glued in than they were. If you are generous and forgiving you can view the three styles as adding to the rich complexity of it all, and that’s probably true as without the flourishes of the complex social subplots and, undeniably, the ‘kidnapped for breeding with the fish people’ concept the main story would be a pretty simple Jaws meets Creature From The Black Lagoon . Even with the weld marks it’s a memorable experience and has enough impressive creature effects and gore moments to keep you engaged. If you can forgive this film the errors of its era (including the moustaches – oh god, The Moustaches!) then it can be a fun group experience and it certainly holds its own against contemporary creature features. At the very least parts of it are a bold effort to do something a bit more with the limits of genre, even if the producers then tried to reel it into something significantly less.