In the world of cult movies, especially that part devoted to the concept of “Worst Movie Ever!”, 1956, very independently produced, sci-fi horror Plan 9 from Outer Space looms disproportionately large. The film, made by the notoriously ambitious, devoted, and talentless Ed Wood, was considered lacking in the merit of any sort from the moment it was first screened to potential investors as “Grave Robbers From Outer Space” (the name changed because the two Baptist ministers, who backed the film as an effort to help spread the message of Jesus, thought it was too sacrilegious), and then rapidly went from a cheap half for double-features to even cheaper late-night TV time filler. Selecting a single reason for its failing to be taken seriously is difficult, as almost every element of the cinematic process is handled with the grace of a three year old making potato art when they are four orange squashes into a tartrazine bender, but none of that gets away from the fact that it is, no matter how you cut it, a highly endearing film.

Now, to make it clear, this is not to say that it is good. It isn’t, not in any rationally expressed manner. It’s also not worth arguing the cliché of it being so bad it becomes good: it says not-good all the way through. Hipsters and ironicists may argue otherwise, but that’s because they want to nail down its “Worst Movie Ever” status to hold it high on that merit. But that fails, because it isn’t the worst movie ever, or even close to it. The worst movie ever is the one that bores you and that leaves you without any remembrance of it, up to and including its name or the fact that you even watched it.

Plan 9 is not something that you will forget because it tries so hard to succeed.
From the opening narration from the wild-eyed, bowtie wearing Criswell – heavy in foreshadowing and light on coherence, and partly lifted from the General Motors ride at the 1939 World’s Fair – to the “blink and you’ll miss it” last appearance on screen of Bela Lugosi (recycled from a previously abandoned project with Ed Wood, titled either The Vampire’s Tomb or The Ghoul Goes West), to the space-ray created zombie infested cardboard graveyard frequented by the wrestler Tor Johnson and gothic Vampira, to the investigation through exposition and resolution through happenstance of the story: no element of the plot or dialogue makes any sense. It’s pointless to even go through it in a review, because nothing makes it better. It’s not to say that the constituent parts don’t have potential, it’s more that it’s three or more over-excited half fever dream stories glued together and told at the same time. 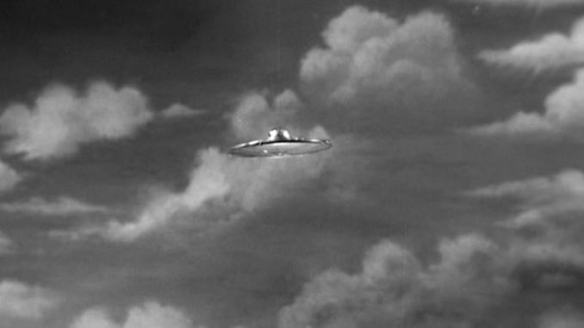 But what the script lacks in comprehensibility, it makes up with gravitas and passion. Whilst many may want the film to be packed with craftless anti-performances from a carnival of delusional freaks, the cast contains several journeyman actors who have no clue what to do with the slippery clay of Ed Woods ‘script’. For every flat and ill-paced portion of mumbled word salad there is a clear and well-formed speech of word salad, and even those who lack anything in even informal talent are clearly trying their dandiest to make it at least sound like it all makes sense. Dudley Manlove, Tom Keene, Gregory Walcott, and Joanna Lee (all names you’ve almost certainly never heard of but who had actual real careers in TV and film before and after Plan 9) are especially notable for their performances here, often visibly straining against the words they have to say and a director who doesn’t know how to use them. Despite the utter lack of coherence, characterisation, or consistency, they manage to pull off something in the region of a good performance that will have the more charitable audience feeling something similar to the same pride a parent does at a school play. 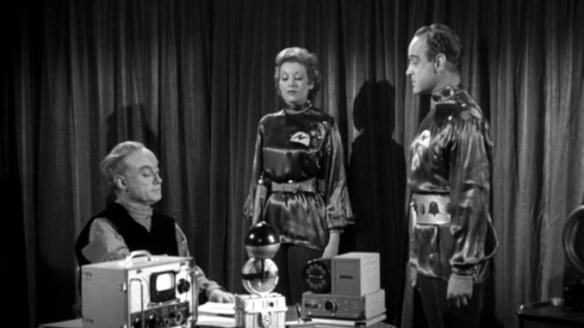 Surrounding them, and sticking out at all stages imaginable, is the set and the “special effects” (sic). Surprisingly, this is also where the endearing nature really kicks in, as it simultaneously shows near zero production value but also (intentional or not) an outstanding level of trust in the audience. The viewer knows what the cockpit of an aircraft looks like, so why bother going beyond two chairs, a curtain, and two control sticks? Graveyards have grave stones, so even if you seem them bend you still know where the action is happening. Flying saucers look like hubcaps floating on string, so why not just use that? It’s obviously low budget, but it’s also damn near abstract in the way that restriction is got around. Like Bela Lugosi’s character that stays all the way through the movie: it was an old man in a hat with a cape, so as long as you never show the new actors face the audience will know it’s that character as long as they see someone wearing the same costume. Generals stand on hills to overlook the battle ground, so who needs to see the army itself? Give the audience the credit and they’ll fill in the gaps, and save you a ton of production time and money.

Your average, unsuspicious, burial in the woods

Obviously, this means that the film isn’t suitable for anyone other than those with a high level of patience and forgiveness. It would be nice to think that those who wouldn’t want to watch “The Worst Movie Ever” wouldn’t even think of giving this a try, but packets of peanuts carry peanut allergy warnings these days. Then again, I’d also encourage those who want to watch “The Worst Movie Ever” look elsewhere, because your overly intentional, snide laughter will be unfairly obscuring the bits that are honestly enjoyable.

If you are into the whole “so bad it’s good” aesthetic then consider watching Tim Burton’s “Ed Wood” instead, even though that takes great liberties with the actual story of how it was all made. Meanwhile, people who are happy to watch someone try, who can take a film scene by scene, or who can revel in the idea overload of 50’s B-Movie sci-fi in and of itself should consider giving it a watch. Just remember to cheer as well as chuckle.