Have you ever wondered what a low-budget Canadian version of Videodrome crossed with Strange Behavior and a teen drama would be like? No, me neither. But, importantly, thanks to Ed Hunt’s 1988 efforts I can assure you that it has several good moments and far too many stairwells.

The film starts as it means to go on; throwing around some creepy monster and dream effects and hoping that it all being about someone on the telly trying to control people’s minds will cover up its shortcomings. The person doing the controlling is Dr. Anthony Blakely, played by the always sinister David Gale. The person who’ll be resisting that control for our viewing pleasure is Jim (Jim Majelewski), and he’s an absolute arse who thanks’ he’s the Rebel Without A Cause. He has a girlfriend called Janet (Cynthia Preston) and for the life of me I can’t work out what she did wrong to be with him. 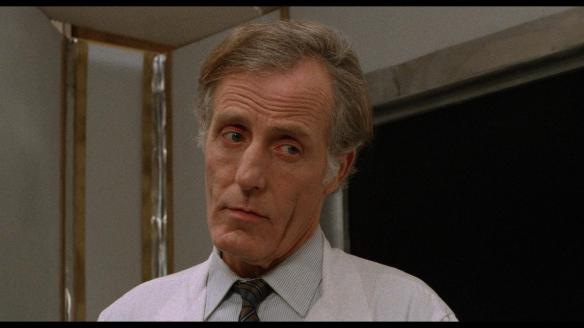 In short order, we find out that the Doctor is broadcasting a TV show that causes some people to wildly and violently hallucinate, resulting in several deaths, that he runs the wonderfully titled Psychological Research Institute, and that he is being controlled by a space brain monster. We also discover that it’s where Jim has been sent by his parents to find out just what the hell is wrong with him, and if they knew about the mind-eating ET and sent him any way you wouldn’t blame him. We get another blast of hallucinations, this time featuring Christine Kossak’s breasts because you are contractually obligated to provide boobs in these movies, and then we’re on to wild adventures of Escaping The Controlled and then Destroying The Controller.

“Officer, what the fuck did you just say about my cravat?”

This middle section is, for the most part, quite good. There are some amazing-for-their-budget nightmare sequences, there is a lovely bit of acting when get to see someone witnessing someone else having these hallucinations, and it’s a steady build-up of threat, tension, and pretty cohesive story points. There is also The Brain’s human goon (George Buza) going some delightful Hospital Orderly Thuggery, a number of literal signposts as to what will happen in act 3, and The Brain getting bigger, nastier, and more powerful.

What all the cool kids are eating these days

All this means that act 3 is that bit more disappointing when it starts faffing around, showing us people running back-and-forth through the sets (especially in the utterly-not-interesting stairwells) and having the single most disappointing car chase in history. Eventually, it picks up, and then the last 10 minutes are a rollercoaster of monster carnage, sweet revenge, and overacting.

When it’s good, it’s pretty damn good. No one is a terrible actor, the production values are consistent, the special effects are just the right side of hocky to pass muster, and it’s mostly got good pacing. When it’s bad, it’s a little bit too “on the nose” with its social commentary (for example, the Doctor’s TV show is called Independent Thinking), and it just burns time on nothingness. I know I say it a lot, but you could cut 10 minutes out of this and no one would notice as it’s just people continuing to travel from place to place. 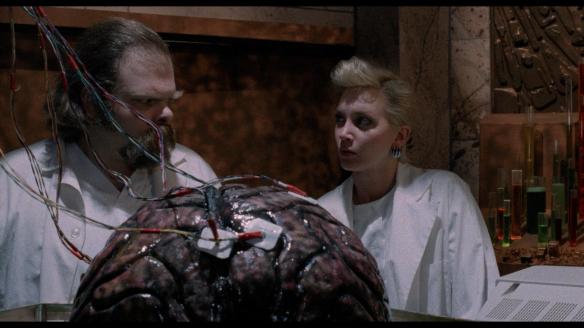 So, why does this get classed as Treasure? Well, firstly because it’s incredibly 80s and that gives it a certain charm and a lot of forgiveness. Secondly, it really does try and go something interesting and exciting. Okay, it doesn’t land that well and some of it comes across as trite; but at least it gives a solid swing at trying to be that little bit more than it is. And, thirdly, when it’s focusing on the hallucinations and the steadily growing Brain, it works pretty damn well. There’s also a number of quality weird science sets and props, which really add to the “50s B-Movie, made in the 80s” feel of it. 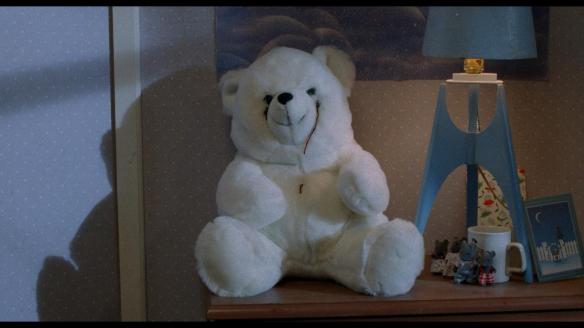 Yes, it has got slow bits. And, Yes, it has got a number of no-brainer bits. And, let’s be honest, some of that 80s factor involves some absolutely misogynistic thinking that will make you go “wow… I’m so glad we’re not quite that bad any longer…”. But it also has people being eaten alive by a demonic Thomas The Tank Engine look-a-like, a tongue coming out of a steering block, and a lazy Sunday morning domestic homicide that just breathtakingly tone perfect. So, if you can worth through the bad bits then it’s absolutely worth an honest watch.

This film has a warning at the end of the film about throwing sodium into water, but it was too late! I’m sorry, The Brain, I must now replicate what I saw!!