Not quite sure how I didn’t know that Vincent Price and Diana Rigg started in a film together and that they both considered it some of their finest work. Probably something to do with Theatre Of Blood being a modestly budgeted British film, done half a century ago, and them having over 250 screen credits between them. The important thing is that I watched it as soon as I found out about it, and by reading this So Can You!

But is it worth my frantic typing? Well, yes. Very much so. I’m going to spoil the surprise and say it’s a Treasure right off the bat. It’s well-paced, well-acted, and swings between the demented, the horrific, and the downright inventively mean with grace and charm. It also knows exactly what it’s about, and how good its concept is so doesn’t waste a single one of its 104-minute run time. Which, as a novelty horror clocking in over the magic hour and a half, should give you an idea of how bloody good it is. 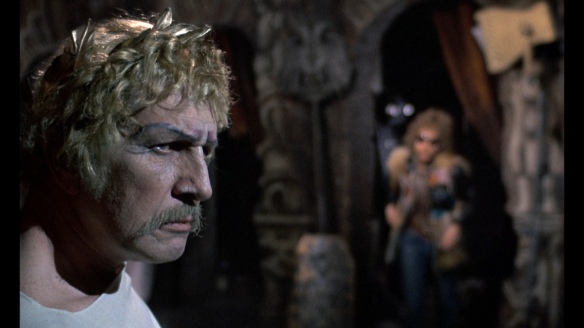 Serious acting for a serious play

If you want to go into it with just a strong recommendation, then stop reading now. If you want to go in which the main hook from the trailer, then read the rest of this paragraph where I tell you that one of the big features (other than a series of entertaining murders) is Vincent Price doing Shakespeare. Is it any good? I don’t know, I’m not the kind of person who can tell you that as The Bard only ever did one slasher (McBeth) and one Sci-fi (The Tempest). What I can tell you is that I think it’s great and that Vincent does it with character-appropriate levels of style and charm, showing an insight into a world where classical theatre’s gain was genre movies loss.

Okay… the rest of this is a bit spoiler. 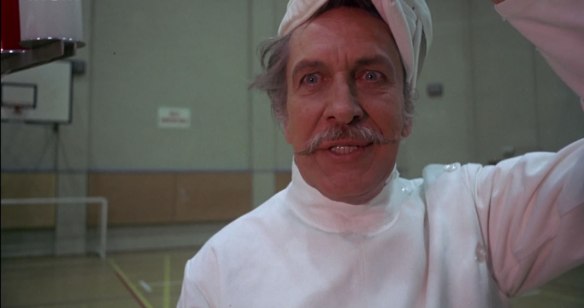 “Thank you, the scenery is quite delicious”

Firstly, the reason Vincent Price gets to read selected bits of Richard III, Romeo & Juliet, Othello, and even Titus Andronicus, is that he’s playing Edward Lionheart; a theatre actor who is a theatre actor who has decided to live the dream and go on a critic murdering spree. The critics in question are, as you’d expect from such a vivid fantasy for anyone who’s ever worked in the arts, a collection of total arseholes; each issued with their own particular form of having their head shoved up their arse. What you won’t be ready for is that the people playing them are an absolute trove of “oh, I recognise them!” from British film and TV, including Harry Andrews, Michael Hordern, Robert Morley, and Coral Browne. They even have Eric Sykes in it, as a background character with a couple of lines! 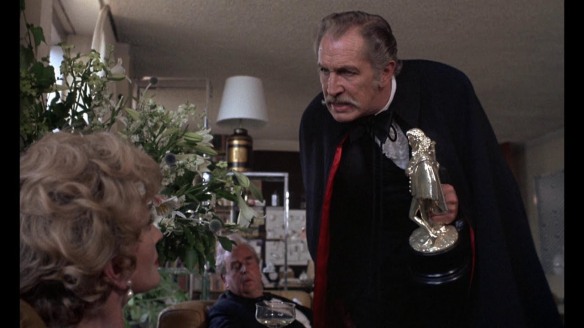 “And your hair looks shit and all!”

The next minor spoiler is that the film is one of the best dramatic horror comedies I’ve seen for a while. I say “dramatic”, because it’s not trying to spoof other horrors or take the micky out of the horror genre. I say “horror”, because this is absolutely a horror movie. The violence is bloody and strong, the morality of the antagonist is abhorrent, and there are tense and frightful moments sprinkled throughout. But, and this is its charm, it’s also a comedy because it’s intentially really funny.

“What about a wafer thin mint?”

The comedy is both absurdist and natural, a hard blend to make. The murders are all themed around how Edward believes the critics have slighted him, so there is a lot of joyful mean-spiritedness that you can believe someone would do but is so over-the-top you can’t help but laugh at the irony of it and then find yourself emotionally complicit within it. This is doubled up by the meta-humour of the actors involved clearly working out demons of previous abuse from critics, which adds to the layers of comedy without getting caught in the frequent post-modern-horror trap of being a bit shit and pulling you out of the moment.

It also has brutal moments like this, which don’t clash with the comedy.

It also pulls off the absolute coupe of having you feel for the hero of the film (Ian Hendry) as he tries to thwart Lionheart, whilst not making you lose too much sympathy for Lionheart. There are a couple of scenes with them together where you’ll forget who you should be cheering for, before begrudgingly remembering “not the person doing all those needless murders”. Similarly, Diana Rigg plays an amazing part as Lionheart’s daughter: empathising with her father whilst also acknowledging the violence he is inflicting on others.

“Yes, I did keep the cat suit”

That the film feels so fresh this many years after it was made is a testament to those involved. The themes, and the power structures of the core situation, are so easily recognisable and still in play that it would be both incredibly easy to make an updated version and incredibly pointless as you’d never do it as well a second time. On top, there is a real morality play going on, both on the screen and in your head, beyond the frequent “don’t go to the scary place” of a lot of slashers. 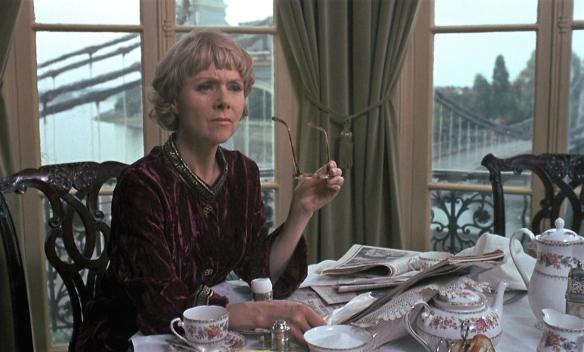 Why it’s not more well known I’m not sure; possibly it is and I was just oblivious to it. Or, possibly, its comedy elements didn’t gel that well with the “serious-horror” of its regional contemporise, like The Satanic Rites Of Dracula, The Wicker Man, and even Psychomania, so it got left by the wayside in favour of “proper” cinema. But that is to deny the strengths that make it so good, it just has as much of a sense of drama as any of them. But it also has, via its antagonist, a huge sense of fun and it wants you to admit that you are enjoying yourself as it rips up a half dozen innocent victims.