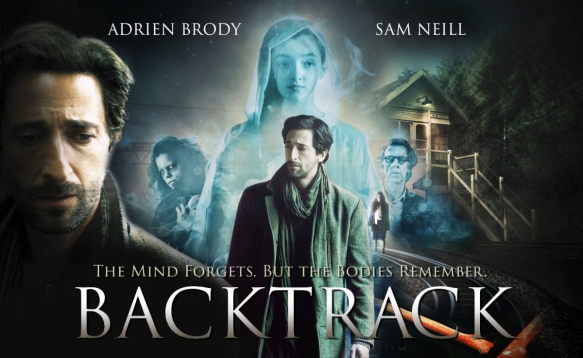 Who’s up for a bit of 2015 “mystery thriller” starring Oscar-winning Adrian Brody and every-award-but-an-Oscar winning Sam Neill? Sure that’s going to get you excited? What if we said it was written, directed, and produced by Michael Petroni, director of well-received The Chronicles of Narnia: The Voyage of the Dawn Treader, The Rite, and The Book Thief (and actor in DAAS Kapital, for the obscure 90s-TV-lovers out there)? Probably not as much, but you’d think you would be in safe hands. That you hadn’t heard of the film might make you a bit hesitant, but surely it can’t be that bad with such a pedigree?

Backtrack starts with Dr Peter Bower (Brody) being upset about the accidental death of his daughter the year before, which he’s partly responsible for. He’s depressed, he’s getting more distant from his wife Carol (Jenni Baird), and he’s finding his patients annoying. It’s also perpetually raining and his friend and fellow psychiatrist Duncan Stewart (Sam Neill) is trying to do all he can to help him move on. And that’s the first 30 minutes of the film; firmly establishing that a dead child is a thing to be sad about and will be a strain on the relationship. Also, it’s raining a lot; which is probably intended to highlight the first two points.

Eventually, things heat up when he’s visited by a spooky child called Elizabeth Valentine, who’s part-goth and part-telekinetic. She appears and disappears a couple of times, trains going past every window become incorporated into the train motif, and we find out that Peter’s child was called Evie [“E” “V”… oooh, spooky…]. After more rain, and making it utterly clear to everyone that dead offspring make Peter a sad man, there are a number of ghostly happenings both on and off trains, and it’s clearly established that Something Isn’t Quite Right. So, 45 minutes into the film, Peter goes back home.

This is where the action really starts as we meet Peter’s ex-police officer dad William (George Shevtsov), his childhood friend Barry (Malcolm Kennard) and the current local chief of police Barbara Henning (Robin McLeavy). Then, once they are all neatly introduced, we finally start going through The Actual Mystery. This section is rather good, with the pieces of the puzzle presented and then slowly peeled back as we get to The Truth. Lesser actors could have turned it into melodrama, but the performances are well measured and pleasantly realistic. Even if it does lay bare the kind of horrific trauma that you would hope would make it impossible for Peter to have his current job.

What unravels over the final 45 minutes of the film is a very solid three-act drama that tells a compelling, well-crafted bit of rural horror. It can’t quite make up its mind if the happenings are supernatural or psychodrama, but the good faith built up in the viewer gives a pass on that. But that assumes you have any faith, or even interest, left in the movie after the first half was so unnecessarily drawn out. Whilst it does build up the scene and layout the stakes, it could have been done in 15 minutes. Not only is the viewer potentially bored by the time the action starts, but you can also be forgiven for being downright resentful of the first half stealing so much time from the vastly superior second portion.

As frequently happens with this kind of film, there is a really brilliant hour of story being told and half an hour latched on to fit the commercial demands. Why, in the era of streaming and multi-channel TV, the producers glued it on to the front, when someone could just turn it off and lose nothing, rather than bulking out the actual narrative section with some vignettes and scene-setting, is possibly the biggest mystery of the film.

Some viewers will find the start engaging, as it is well shot and the scenes with Brody and Neill are excellent, and it does dovetail into the rest of the movie well. However, it’s likely that sticking with the film will be just too much effort for most people. If you want to try it without the tedium then you have my permission to skip to the middle as soon as you hit play. This is one of the best performances and dramas to go into the Trash pile, as due to its own bloat that is where it must go.