It’s another season of Marvel TV, so it’s time to go through the all-important mythos introductions with this first episode. In this case, the titular character is pretty straightforward as Loki (Tom Hiddleston) has been with us since his Marvel cinematic debut with Thor in 2011. He’s charming, arrogant, happy to knife anyone that gets in his way, and his helmet is still both utterly ridiculous and fashionably dashing. The only minor complication is that the Loki we have here is the defeated mischievous god at the end of Avengers Assemble, rather than the emotionally evolved one we saw die in Infinity War. But don’t worry about that, as this is just Marvel Universe 199999, introducing us to the fun multiverse shenanigans that Universe 616 has been dealing with for ages.

The Big New Things- that get their beefy introductions at the start of this series are The TVA (Time Variance Authority) and Agent Mobius (Owen Wilson). The TVA as a time police department, endorsed by god-like being and presented in a 50s Corporate America themed style. Their world comes complete with velour drapes, retro sci-fi uniforms, and exciting animated infomercials to match. With authority bestowed upon them by the mythical Time Keepers, the TVA has unlimited power and resources, so it was a nifty creative choice to pair that up with unlimited office admin and staff who mainly consider it their day-job.

Mobius is someone clearly on a mission who will give whatever exposition is needed each episode, along with a slow disclosure of their personal plot and interest in Loki. But, far more interestingly, Mobius seems giving direction to Loki’s attempts at bucking the system. Because, in time-honoured tradition, now that Loki is the protagonist, he is no longer the toughest person in the room. Well, this particular Loki, because the series antagonist seems to be ANOTHER Loki (described as The Devil) causing wanton death and destruction throughout time. Because you can do that kind of storytelling once multiverses and time travel are a thing. 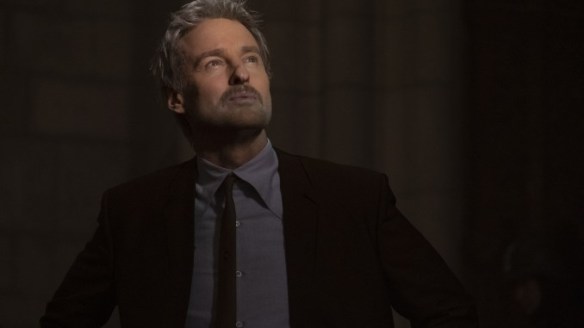 So far, so standard Marvel TV. Everything looks amazing, the script is utterly on point, the acting is impeccable for what it wants to achieve, and in one episode, it’s entirely laid out the genre expectations for the next five hours of content. Other than that, there is very little connection to WandaVision or The Falcon and The Winter Solider. Right now, it’s not just another narrative thread; it’s a whole different concept, going for a cosmic Comedy of Errors rather than personal trauma presented as a homage to television or a redemptive political allegory.

Any critique or evaluation of this episode is thus fundamentally pointless, beyond the aforementioned production values. There is lots to enjoy for faithful Marvel fans here, and the script has some snappy one-liners. However, we won’t know if it’s any good in-and-of-itself until we get to the end of the final episode, and we won’t know if it’s any good as part of the overall narrative until we see how it ultimately feeds into the rest of the MCU. We also can’t compare it to its two closest siblings unless you have strong opinions about a show coming out on Wednesdays.

And this is why I think it’s a great sign that Marvel has finally decided to apply its method to TV shows fully. I can easily see fans of the Marvel cinematic movies not connecting with Loki, and I can see Kevin Feige being fine with it. The films have covered a wide range of genres, and that kept numbers high because they didn’t target, and thus burn out the same audience. It’s exactly how they’ve managed to build such a large fan base with the comics. So if you don’t like the look of Loki, you can still be excited about it as a marker of the quality to expect with Marvel Studios.

So far, we have a sixth of a show that feels closer to The Hitchhiker’s Guide To The Galaxy or R.I.P.D. than Life On Mars or The Bourne Identity. It’s fast, its comedic on a conceptual level, it takes itself just the right level of seriousness, and it gives Loki a lot of screen time (the show is named after him so it would be rude not to). If you are on the fence and can either avoid or live with spoilers, then I’d say wait until the whole season has been released and evaluated before you sink the time in. And if you are a Merry Marvel Marching Society member who doesn’t think it’s for them then don’t panic. Something will come along that is more to your taste, and you can catch up with the meta-plot on Wikipedia.