According to the blub that came in the review pack “Redshift #1 is a bleak sci-fi mini-series which can best be described as Lost In Space meets The Expanse”. By the second page, we have a dead mother, a few pages further on we have a sinister Ministry controlling Mars, and by the halfway point we have a story-within-a-story that could have been a depressing gut-kick of a comic within itself. So; yes, it’s nice to have a comic live up to its own hype.

As first issues go, it’s got everything I look for. A handful of characters with enough definition and difference to care about individually, clear factions and difficulties to overcome, and a steady pace that keeps you turning the page. Things don’t feel too expositional and allows the comic to give the reader credit for being able to put things together themselves. It also has just that right level of apocalypse to it; an environment so shitty that it won’t go away, but that you can still see people living and trying to thrive in.

The expansiveness of the setting is rendered in a pleasing, relatively realistic art style. Whilst the line and inks are high quality, the real stars of this debut issue are the use of colour and the layouts. The team isn’t afraid to mix things up with pitch-darkness, a vibrant range of desert tones, or a dazzling space background. They are also happy to spread out the story to compliment the pace, mostly having three or four panels a page and letting things breathe. There are a couple of one-panel pages that take your breath away, partly from the art and partly from their context. 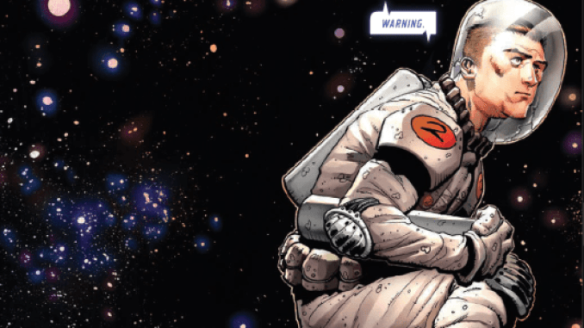 This is modern science fiction at its most digestible with used touches of technology and futurism to help with the setting but mostly telling a small, human story. Questions are raised, possibilities are opened, but primarily you’re worried about the people. Throw in the genesis of a wider plot, some internal group tensions, and a real sense of direction. I’m already wanting to add it to my pull-list.