At some point in the production process of this Abel Ferrara movie, the decision was made to switch it from a theatrical release to a made-for-TV special. Whilst the details are sketchy, it appears to be how the wind got knocked out of the collective sails of all those involved, as what has moments of pure, befuddlingly creative genius manages to become drab and low-energy. Given that it’s a car-centric cross between Jaws and Death Wish, that’s quite the accomplishment.

Things start strong, with The Bad Car being established as a homicidal lunatic in an all-black, tinted window, Muscle Car drives a waitress off a cliff and into a spectacular fireball in the first 10 minutes. Expectations are then heightened as we are introduced to Rick Benton (Ken Wahl), everyman-mechanic and owner of Spectacular Eyebrows, and watch his brother Jeff (Brian Robbins) get sacrificed on the altar of plot by The Bad Car. Stakes are established further as we see Rick go through rehab, join a therapy group where the leader reads our drink-driving stats whilst a member calls for Brutal Street Justice against anyone with under-inflated tires, and The Bad Car starts stalking people and knocking them off the road with its front axle-mounted spinney death blades.

So far, so “we know where this is going” is enough to keep you engaged. When the triggering incident demonstrates the total film’s dedication to keeping everything car-based, by having Rick’s truck lightly shoved by two punks in a car at the drive-thru line and him then battering the crap out of it ‘til they drive away limping, with the crowd cheering for Rick’s actions and the police officer letting him off on the grounds of vehicular self-defense, hopes rise up. And after the obligatory montage scene and discovering during Rick’s first bit of action as The Gladiator that his truck now comes with turbocharged engine, ramming plates, and a home-made grappling-hook cannon that magically doesn’t kill everyone inside the cars it’s fired into, you are happy to forgive the slightly slow buildup.

Then, something magical happens. We see The Bad Car kill more people for the crime of just being near it, with fireballs and screams for all. We see Rick become a famous vigilante, sparking off a side-plot around the rights and wrongs of taking the law into your own hands. And we see Susan (Nancy Allen) finally fall into bed with Rick at the end of act two, after being introduced at the start of act one, because… well, those eyebrows… by night and slag off his Gladiator alter-ego on her radio talk show even later at night. And it’s all quite dull.

It’s like someone politely asked everyone to just tone things down a bit, and not quite phone it all in. From the acting, to the stunts, to the camerawork and the sound track, everything is just that bit muted now. No-one onscreen sparks; even though the cast is filled with great actors and there are several good moments, nothing manages to tantalise. It’s all just enough, and no more. People are driving into petrol tankers, a drunk-driver in his car gets dragged out into the street through his closed garage doors, and their ending is a vehicular-based duel in a scrap yard, yet it’s not even worth looking those moments up on YouTube. 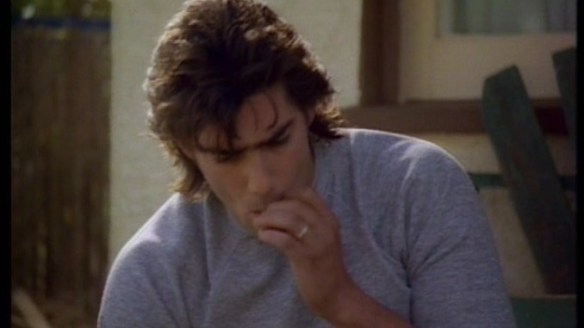 These are all the ingredients for a marvellous, mishmash of safe-for-TV violence, civic-minded PSA, and stupid overplaying of a gimmick. But at no point does the film get excited about itself or even consider leaning into the concept that is clearly never going to work as a serious or restrained bit of drama. It doesn’t get overly serious, earnest or silly, it just mumbles apologetically through it’s run time. For all its promise and potential, it is disappointingly middle of the road, trundling along, just on the speed limit, as it heads towards the Trash.