Once upon a time, mostly before they could get a steady supply of really good blood effects that would wash off of diaphanous nighties, Hammer Films did a lot of business with its Sci-Fi horrors including the renowned Quatermass series and the mostly forgotten X The Unknown and Spaceways. Unfortunately, they didn’t make Village of the Damned, so they released These Are The Damned as frightening children were in at the time. Directed by Joseph Losey, in exile from the USA for being a card-carrying communist, and reasonably based a book by H.L. Lawrence, it was applauded by The Times upon its release and has been recognised as a highpoint of British Sci-Fi cinema.

The film starts as a rather good, and rather peculiar, post-war seaside drama. Joan (Shirley Anne Field) is a member of a Weymouth biker gang, who violently ambush the men that Joan seduces on the seafront. The leader of the gang is her brother, King (Oliver Reed), who sets himself apart from his leather-jacket wearing, café-racer troops with a tweed jacket and a cane. Gradually, and through a series of rather unnerving but spectacularly shot sequences, we find out that Joan is not happy being trapped in her hoodlum world by King and his overly protective/borderline incestuous ways.

Eventually, Joan decides to approach the latest victim of the gang’s crimes, the older American Simon Wells (Macdonald Carey). She part seduces, part befriends him, invoking the ire of her brother. They escape the gang by boat, at which point Simon makes advances on her, and after awkward discussions which revolve around Joan’s strength of character and vulnerability, begin an affair. All the time, the gang are hunting for her to appease the violent King.

Shot in something closer to the expressive French cinema of the late 50s, rather than the staged Ealing Studios style of its local contemporaries, it carries its messages through the era’s usage of innuendo and implication that hold up well in our modern times. Unfortunately, it also employs a lot of the misogynistic language and mores of the time, so that and the significant age difference between the couple (Joan is presented as early 20s, Simon as in his 50s) can make for awkward viewing. However, that creepiness plays well in the context, adding to the tension of the viewer and making Joan’s choice between the two romantically inclined father figures and possible life paths all the more intense.

Eventually, as the second act nears its end, the couple elopes to the house of a nearby sculptor, whom we know has been having an affair with the head of a local military installation. After the couple breaks in and use the owner’s bed, the gang then turns up and chase the couple into the grounds of the military base, resulting in Simon, Joan and King going over the edge of a cliff and being rescued by the start of a different film entirely.

The new film is a sci-fi short about a bunch of strange children being held, partly for their protection and partly for the public’s, in an underground base. Brutally nihilistic about the inevitability of a full-blown nuclear war, and featuring nine kids with incredibly received pronunciation, it drags us through an unrelentingly pessimistic tale of misfortune and the attempts to do the right thing in the aftermaths of great wrongs. Freya the sculptor (Viveca Lindfors) and Bernard the scientist (Alexander Knox) are the two poles of the same wish to better the world, drawn together but fated by inherently different outlooks on life. 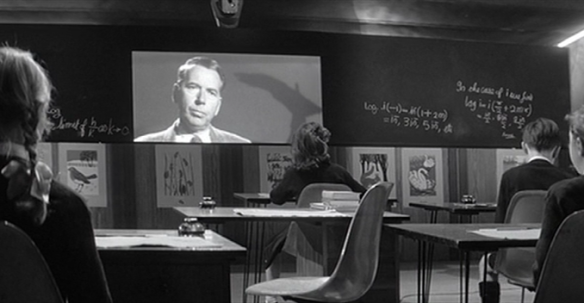 Whilst the shooting and scripting style continues in the second part, the protagonists of the first part now become the means of exposition and the tools of agency for a gaggle of children in the base. Rather than ending their own story, Simon, Jane, and King are given enough time to get to a really interesting moment and are then just left there whilst the focus goes to the bleakness of the kid’s imprisonment. The youngster’s situation is made worse by the fact that the audience is able to empathise perfectly with them and their captors, with the cold logic of all sides playing out to an unwinnable situation.

Eventually, things come to a conclusion, in a shocking and stark manner that was the keystone of the Hammer sci-fi classics. There is no “Happy Ever After” for anyone, in a dour resolution that makes no apologies for the feelings in your stomach. That a film this old can sting so sharply is a testament to its accomplishments, although it does leave all the actions of the first two-thirds of the film with unsatisfying, albeit definitive, ends.

And, sadly, that is why for the casual viewer this will land in the Trash pile. Both portions of this are great, but the weld marks between the two are stark and distracting. There is no clear reason for the two parts to co-exist. So much was built up in the love-triangle thriller, and none of it had a chance to play out well. The ending is demanded by the final section, rather than earned by the film as a whole, and no characters are able to learn or evolve. 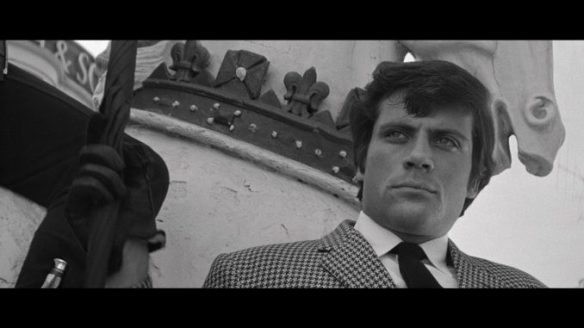 But that call is by a very narrow margin because there is a lot of it which is pure Treasure. Firstly, Oliver Reed is amazing in his role; it’s one of his earliest starring roles and he just draws the camera to him. He manages to produce menace and hypnotic instability with the smallest of actions and just the right tones in his voice. If Malcolm McDowell didn’t study him whilst preparing Alex in A Clockwork Orange, I’ll eat my bowler hat. Shirley Anne Field and Viveca Lindfors also give standout performances, bringing an innocence of youth and cynicism of age into their respective characters. Finally, Alexander Knox manages to give just the right take of paternal concerns and officious determination into his performance, adding to the mixed feelings about the action he takes.

Were it two separate films it would have been a different result, and don’t think that making or justifying the call of Trash was an easy one. It’s frustrating that its joinder was so clunky, as it is whilst you bask in the solemnity and gravitas of the somber ending that the disappointment of the split really kicks in. It could be trying to say something about the dangers of paternal instinct and overprotection, or possibly about hidden dangers pulling people out of their ordinary lives, but it doesn’t work as well as it needed to. As it stands, possibly due to the passing of time, it’s either a majestic insight into Cold War horror with a love story glued on to the front or a tight thriller showing an unpleasant post-war England with some sci-fi tagged to the back.