It’s always frustrating when a movie manages to put in all the effort of being a good film, but ends up for far from the mark you thought it could have landed on. Unlike with other films that have been mauled in this column, a lack of talent and a dodgy core concept can’t be blamed for this state of affairs. It simply ends up biting more than it can chew, and becomes less than the sum of its parts.

John McTiernan got to direct Predator and Die Hard as a result of this film, and within a few minutes it’s not hard to see why. It’s an effortlessly stylish piece, filled with an 80s Los Angeles filmed to create a visceral psychoscape of the sprawling conurbation. The place looks hot, grimy, exciting, and almost never ending. The film’s tone is utterly set by the location and every loving frame taken of it, with a line drawn between its everyday reality and the horrors that live beneath. The titular Nomads are also wonderfully presented as almost a symptom of the city, an attempt at a new mythology that perfectly reflects that one place and time. To compliment that, the editing style adds a touch of uncertainty and intensity, that swings between a dreamy hard-rock playground and vagrant glam-nightmare slaughter house.

The visuals are complemented by the cast to an amazing level. Pierce Brosnan used this film to transition from clean cut TV star to brooding film icon, and other than an accent that seems to have come from the Dudley region of the France/Italy border, manages to handle his half of the movie well. He pivots from being the confident and loving Jean Charles Pommier, Anthropology Professor & Bold Adventure, to an obsessed and frightened victim of a world he desperately tries to understand. He also shows off a well coiffed beard and a willingness to get oiled up for smooth light bum-shots, which probably helped his reputation with the ladies.

The other lead role is left in the hands of genre favourite Lesley-Anne Down, as the ER medic Dr. Flax. Whilst she doesn’t have as good a script to work with as Brosnan, she manages to handle her descent into madness and resolution with dignity and intensity. A few of the moments with Jean’s wife, Veronique Pommier (played by Anna-Maria Monticelli), show off how well she could have done in more mainstream cinema if the roles had come her way. She isn’t a scream queen, she’s a woman regaining control of her life and then keeping her head when everything goes beyond that which others can fathom.

On the bad guys side of things, Adam Ant does an enthralling job of playing the head Nomad. He doesn’t get a word to say, which may disappoint some but works really well as he uses his charm and presence in an exquisitely sinister way. He also manages to help sell the goth-BDSM-streetgang look of these mysterious creatures, probably because that was his entire wardrobe until he discovered highwaymen. Helping him out in the sinister stakes is B-Movie goddess Mary Woronov, again in a non-speaking role and bringing enough menace to scare most front rows out there. It’s rare to see a woman play “The Muscle” so well, especially when she’s of average build and does it all through mime. 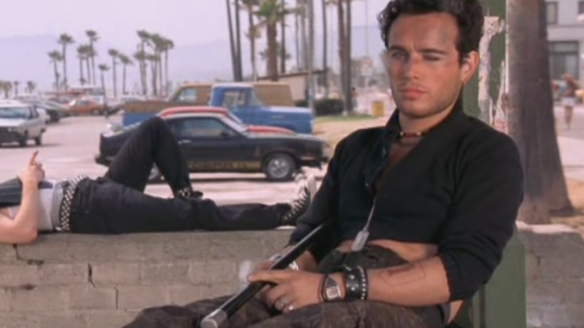 Obviously, no trip into the Inferno is complete without a Virgil to lay on the exposition, and that is amicably provided by Frances Bay as Bertril, The Sinister Blind Nun. Not only does she act as a literal guardian of the doorway, so that Jean can escape a kicking, but she puts her all into a scene that best exemplifies where the film breaks down. Offering up some tea in a burnt-out nunnery, she avoids any real explanation of what’s been happening for the previous 45 minutes and gives a talk that boils down to “Oooh, you don’t want to go near the Nomads you’ve seen dangerously kill people, they’re a bunch of dangerous killers.” And then the movie breaks into an Ozzy Osbourne video for “Sexy Nuns Massacre”, which almost maybe explains something if you fill in the gaps yourself. What should have been a pivotal moment ends up just being annoying; at every second of it, you are straining in your seat for things to really kick into place, but it resolutely just happens and then buggers off.

Whilst everything mentioned before works really well, the core issue is that the film eventually falls flat on it’s arse by not really adding up and trying to be far too fancy than it can pull off. The film starts with Dr Flax treating a clearly out-of-his-mind Jean dying in an ER room, and then rapidly switches to half of everything that leads up to that moment. The 30 minutes of him moving to LA with Veronique, giving up his study of the “any kind of Nomadic tribe, anywhere. Really, they’re all the same”, and then discovering The Nomads are quite enjoyable bits of cinematic mystery. We get tempted with a plot which doesn’t go anywhere, then the revelation that people can go 36 hours from party to party in an unregistered van (because Jean never heard of taking speed or not registering a van?), and the first signs of them being sinister and then BAM we get thrown back to Dr Flax because that was all a vision she was having.

We now have two stories running side by side, Jean’s tale of being drawn into the world of the Nomads and Dr Flax’s story of finding out that Jean got drawn into the world of the Nomads. Frankly, hers isn’t that interesting, because she only discovers the threat of “if you can see them, they can see you” to her after we discover it from him. It tries to tell some kind of parallel and trippy storytelling technique, but doubling up doesn’t do much more than get annoying after a while. The only bit of that’s even worth the effort is when the film spends a minute and a half building up to suggesting that Flax made out with Veronique, but rather than beat the potters wheel sequence in Ghost by four years, it ditches it in two seconds.

To make it worse, nothing is ever explained in any kind of satisfactory manner. You could try and play the “oooh, but that’s really spooky that is” unimaginable powers card for it, but that never gets set up and it feels more like things got left on the cutting room floor. Most members of the audience will be able to fill in the gaps after watching it, if they can be arsed, but it has too many non-sequitur bits left lying around for you to feel like it’s worth it. A great waste of time is the final assault on Pommier’s house, which opens up with the fury of Mad Max and then sputters out into an almost apologetic exit. The two lead actresses scream all the way through it, but it’s mostly through contractual obligation. When the final twist ending lands, it annoys rather than excites, because the groundwork for it was missed out somewhere in the second act.

It’s a shame that this ended up being Trash, as maybe 10 minutes more of screen time and a more measured out story could have saved it with ease. Instead of discussing how effectively it produced an amazing metaphorical monster, the after-show discussion will be about how much the script gilded the lily and forgot to put in major scenes. As for the in-show discussion, that’s mostly going to be asking where a main character has gone and if you passed out during a key scene. A horror movie shouldn’t leave you with a combination of boredom and frustration, especially when it’s had so many actually effective scenes, so many great performances, and so many great ideas left to wither on the vine.