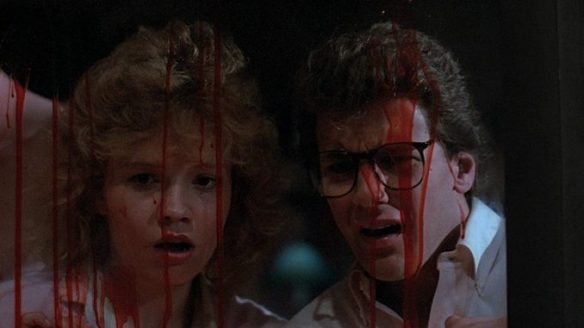 I first heard of this film when I was 10, reading a preview in Sky Magazine. The basic premise had everything my young mind needed: the promise of robots, onscreen dismemberment and a snappy title. They were simpler times then, and Terminator was the apex of cool, so I thought watching it would have just been the greatest thing ever. Needless to say, I didn’t, because my parents weren’t mental and neither were those anyone I knew, so this sci-fi horror went into the “must watch, eventually” pile at the back of my mind. Snap forwards to a few weeks ago and, in one of its few moments of usefulness, Amazon Prime suggests I might want to watch it. “Yes”, says I, “Yes I do!”. But for all my anticipation and childlike excitement, the older and (possibly) wiser me was worried it would turn out to be trash. And I was right, but it was still a really good laugh.

The set up for the film is simplicity in a nut-shell: an 80’s mall in Sometown USA installs three military grade robots to patrol the building at nights. Each of them looks like Robby the Robot shagged Twiki, and the resulting offspring needs tracks to carry their deformed bodies. A couple of people complain in mild disagreement (giving Paul Bartel and Mary Woronov some random screen time as Mr & Mrs Bland), but most people agree that roving deathbots are cool. Everything is fine until, on the first night, a lighting strike activates their homicide circuits. Meanwhile, a group of 8 youngsters are in the furniture department for… well, it’s hard to describe it. It’s not exactly “group sex”, because the four couples are all getting their rocks off separately, but they’re all within 10 feet of each other with nothing but a few sales notices between them. Young people, hey. At least two of them have the decency of being married and very obviously in actual, practical love. Once the deathbots have completed Phase 1 of their rampage – kill the technicians who’s job was to watch the wall of flashing lights – their next act is to go down to the bed store and using their array of anti-intruder devices. 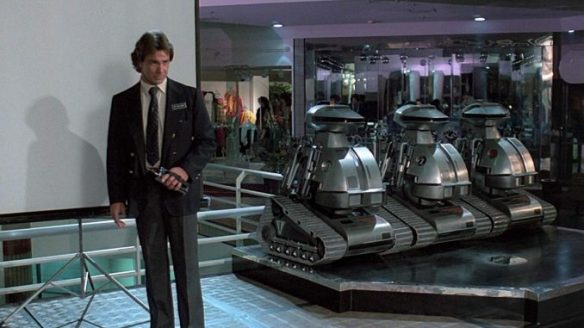 And boy-oh-boy, do they have a lot of toys to choose from!! The list includes tasers (stun to sizzle), pew-pew lasers ( going from minor ouchy to “Jesus Christ! Her head exploded! On Screen! In Detail!… Cool!!”),  really jabby arms, thermal lances, and, for absolutely no reason logical reason, C4 launchers. Quite what problems this facility was having wasn’t made clear, so I’ll just assume it’s built on a portal to World War VII. The important thing is, like with all good slasher movies, the fun isn’t just that the slashers are unkillable but that the audience never quite knows how they’re going to kill the slashees when they catch them. Or, in a delightful series of incidents, if they will get them, because these kids are smart!  Not only is their first instinct to trying running away once the first of them dies wide, but they have a reasonable plan for fighting back once they realise their exits are gone. They’re also rounded enough that you may actually end up liking a couple of them the victims. Yes, you’ll be sad to see them go; although not sad enough to stop chuckling about it. 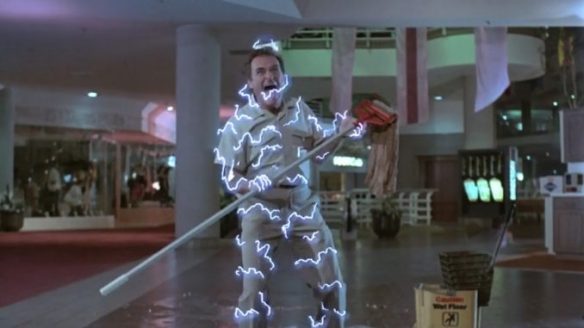 All of this probably sounds like a load of cliché nonsense, which it is. But it’s also doing little things to break out of the moralist conventions. The kids aren’t hunted for having sex, it’s just that their wierdo sex party caused them to be there when the bots went mental. The last girl is a virgin, but her being a virgin is never made fun of and there is a pleasant twist at the end. The married couple get no favours from the bots and provide a strong emotional core at the movie, rather than either being saintly or joked at for their situation. Okay, it’s not very far out of the wheel house, but at least they obviously tried. And, dammit, trying is the important thing! Even if it does inevitably lead to death by Dusty Bin on PCP. 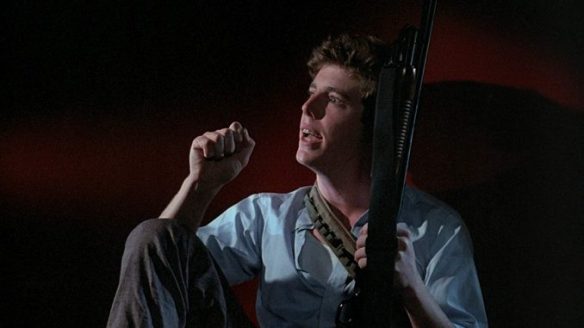 Given it’s age, and it being in a mall with lots of “oooh, I remember those!” items on display, there is a fun 80’s nostalgia to it (including brazen displays of contemporary fashions and boobs). So, whilst back then it was a B-Movie, now it’s a B-Movie with retro charm! It’s also a bit less knowing than other mall movies or modern throwbacks like Stranger Things. It’s trying to be serious, it’s trying to say something! But it also accepts that it’s a vehicle for your voyeuristic enjoyment, so it doesn’t worry about being too serious or real. It’s even got decent enough FX, although at times it’s a strange mix of 80’s practical and early SFX (mostly for the lasers). The killbots trundle around impressively, even whilst looking over sized and malcoordinated. Things blow up and catch fire with the kind of gay abandon that everyone can get behind. Bodies get chopped up and bleed all over the place with pleasing corniness. Again, it knows what it is and what you want, you sadistic bastards! 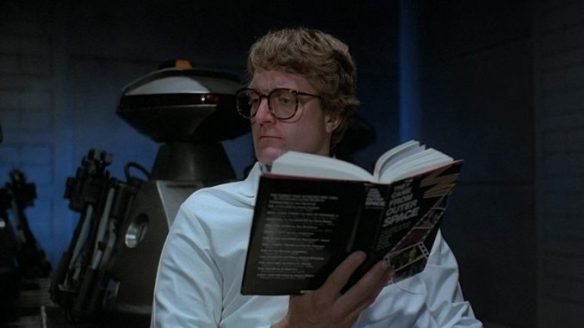 None of this is high-end stuff, but it gets it’s message across well enough; and that message is “here’s 90 minutes of movie, we all knew the posters was going to be the best bit”. It may also have tried to say something about the terrors of technology and consumerism, but it’s three the boogeybots ripping up campers in the forest mall. You know it, so you might as well enjoy the ride.