Because Todd Philips is in the news (and in my spare time I’m a screaming muso and punk aficionado) we’re looking at a documentary that is his earliest work. Shot in 1993, Hated follows around notorious shock-rocker/dangerous lunatic GG Allin as he lives out his rock-and-roll nightmare. Whilst GG had some reputation on the US punk scene, this 53 minute film sent him to notoriety and onto many “most degenerate person in music history” listicles. As for Todd Philips, it might show a lifelong appreciation of performance dickheads and happens to be the highest grossing student film of all time.

The film opens as it carries on, with an endorsement of GG’s art by John Wayne Gacy (aka the Killer Clown Serial Murderer). One minute later and we know GG is a junkie who’s on skipping parole, for assault, to do a tour because Todd encouraged him to. By the time first song is finished (“Die When You Die”) you will see GG nakedly attacking his audience, appearing in court, and eating a hotdog that’s just been shoved up someone’s bottom. There are also testimonies of his rock-n-roll god status and audiences going wild for him. For many documentaries this would be a highlight reel, for this it’s just a couple of warning shots.

What follows is an insight into a world that his fans would call “challenging” and “divisive”, and everyone else would call mad. Admirers and detractors describe his violent outbursts and his blood & excrement (mostly his own) filled shows. It becomes rapidly clear that GG is a dangerous, junkie vagrant, considers himself the king of the world, and performances of misanthropic songs to simple sleaze-punk tunes are the medium for his art. It’s also made very clear that they normally end (and sometimes start) with him stripping naked before they become riotous brawls. For variety he also does spoken word performances. Todd sets up a University performance, which starts with a naked GG pushing a banana up his bottom for some reason. It ends with him hurling abuse, and then chairs, at the rapidly retreating crowd until security turn up. You get the distinct idea that both Todd and GG thought it went wonderfully.

Interspersed amongst more footage from the shows are multiple snippets of GG himself explaining how amazing he is. This he does with great vigour, conviction, and surprising charisma. When not covered in his own poo and nakedly flailing around, he’s quite the imposing and intriguing figure. He coherently lays out his unrepentant agenda of total disregard for anyone, including himself, and his goal of on stage suicide as the ultimate act of rock-and-roll excess. It’s bitterly nihilistic but somehow compelling, especially as he refuses to apologies for or make excuses about his actions. You quite probably won’t like him for any of it, but he doesn’t care and that tension makes it all quite watchable. All of this is helped by Todd presenting all of this as matter of fact, letting the evidence speak for itself. 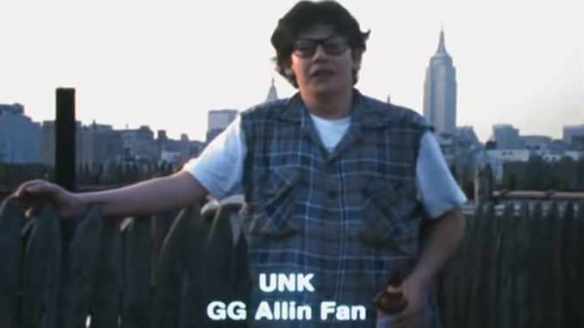 Regularly GG will say or do something offensive, beyond the whole naked and covered in poo thing. But his words and actions never manage to truly offend or be unwatchable. It’s nowhere near as shocking as GG thinks it is, partly because this is very clearly a self-destructive world you have to opt into. It is a world that will stick with you, though, if nothing else but for it’s blunt realness. In one notable scene, Chicken John comments that anyone can hit themselves in the face and then visibly winces when he does so. Meanwhile, GG kicks the tar out of himself and just carries on smiling. It probably won’t change your life or make you feel impressed, but you will absolutely nod and go “yup… that’s a thing.”

It’s difficult to say if the film is a great example of a documentary work or not, partly because of Todd’s interaction and encouragement/facilitation of GG’s activities. What can be said is that it’s a mystifyingly compelling watch into a quite exceptional world and existence. Some will find it refreshingly honest; most will just be dumbfounded by it all. It’s got a watchability that can’t be denied, as things just get worse and worse for no reason other than they are inevitably going to head that way. Whilst GG’s behaviour is juvenile and his self-importance is pretentious, the voyeuristic nature of it all just carries you along. As such it can only be described as a treasure for those into the stranger parts of life, even if the subject matter may be pure trash.