It’s difficult to write a review for a film like Joker, primarily because of the amount of hype that’s been built up around it. For over a year there have been announcements, stories and opinions flying around, from a multitude of camps. First up there are the DC fans, who have been excited at the idea of a villain-centric movie and of DC making two good movies in a row. Then there have been the naysayers, pulling it down because of uninspiring trailers and the habit of the more vocal Joker fans being screaming edgelords. Next up has been the marketing machine, keeping the film “a hot topic” and then, nearer release day, putting it on every bus in town. Finally, we have the director and star declaring it a piece of Art and a new dawn for comics movies. So, does it stand up to its hype?

No, no it does not. Not by a long shot, in any direction. For all its efforts to channel Taxi Drive and Fight Club, and it’s a dedication to the art of urban squalor, this is not a great piece of art. It’s also not Incel: The Movie, because the Joker insists that there is no point to anything and about the biggest message the film carries is “Well. Shit happens. ” It even manages to fail, overall, as a great supers movie. Yeah, it’s in Gotham and the Waynes are involved, and the moments they are around are probably it’s best. But it suffers the curse of that comes from signing a light on all monsters, they go from mysterious to explained. In Joker’s case it means going from chaotic genius to whiney git, which is just not that great a look 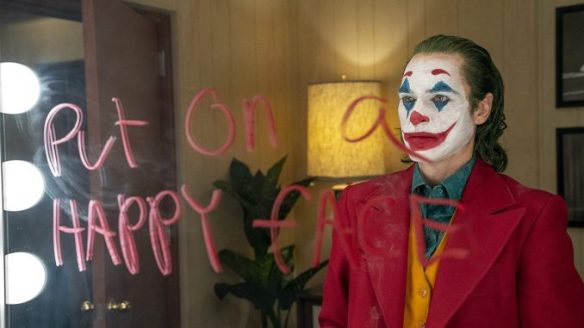 What we have here is two hours of the luckless poor bastard, Arthur Fleck, being both literally and metaphorically kicked in the nuts. An unrelenting hellfest of tragic events, with an accompanying cavalcade of awful people, set in the picturesque hellscape of derelict 70’s New York Gotham. The rich are absentmindedly snotty and uncaring, the poor are grimily destitute and romanticised, the weather is always overcast, and everything bad that could happen to Arthur does so with precision unpleasantness of biblical proportions. It’s not that he’s innately unpleasant, he’s just obviously suffering from extreme neurological problems and mental health issues that the world doesn’t care. But that’s fine because he doesn’t care about the world much either. He’s very much wrapped up in his own private hell, so when he does set off the events that make the bulk of the plot for the film he doesn’t notice. He drops a match on the social tinder of Gotham, and the resulting fire is just a backdrop that he ignores till the very end. When confronted by what he’s done he swings between indifference and apologist, with no bold or noble act of defiance to his name. He’s a killer and achiever by happenstance, nothing more or less. 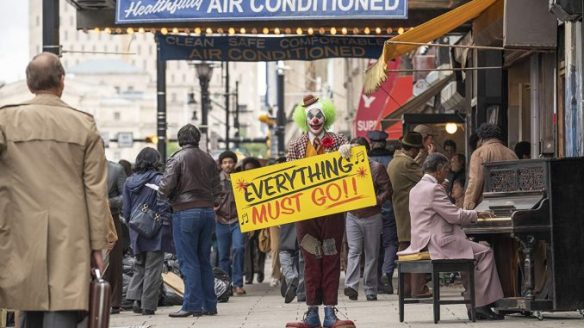 Based on the plot and the script this should make the movie awful, but Joaquin Phoenix single-handedly saves it by doing what can only be described as a phenomenal bit of acting. He is utterly convincing as Arthur/Joker, conveying all the emotions carried by that pour soul. It all starts with the laugh, in this story a neurological condition where he guffaws when sad or stressed. Phoenix manages to hit every nuance of it: the pain, the self-disgust, the frustration at being unable to control it. Everything. He spins it between an animal howl and a cry for help, leaving us unnerved at every stage. On top of that is his raw physicality, acting one moment like a creature unsure of its own body and the next like a ballerina in their own private heaven. He is timid and menace all in one, and his eyes add innocence and age to the mix. Astounding. The rest of the cast do an assortment of performances: some good, some okay, and Robert De Niro collecting a paycheck.

It’s a shame the rest of the film couldn’t hit the consistency of Phoenix’s brilliance, ambiguity, or subtlety. When the film is good it’s very good (though never truly great), with some interesting contradictions and little subplots buried in there. People do and don’t get their comeuppance with mixed results, the good and the bad intermingling into a pleasant state of confusion. Motivations are questioned, often briefly, and moral ambiguities can be found when looked for. But the film is too determined to stand back from these, to have them being things buffeting Arthur around rather than be given enough time to come to the front. It’s too determined to make everything grim, and all about Arthur, to really let anything else develop. Even the social movement that he triggers is never given much form: part pastiche of Anonymous, part critique of Occupy, it’s clearly not praised for its excesses but it’s ennobled in several of its actions. It’s quite likely that it’ll fuel the anti-hero chic of it all, but the character who challenges the Joker to be accountable for his actions also gets one of the most extreme deaths. Maybe it’s trying to say something deeper, maybe it’s exploiting psychiatric disorder, I’m not sure even it knows and if anyone tries to go “ooooh, but it’s up to the viewer to decide….” then eyeballs will be rolled.

What we have here is an overhyped film that could only get where it did because of the history attached to the title character, that tried to do something groundbreakingly new and ended up being relatively by-the-numbers. It’s nowhere near as offensive, in your face, or edgy as it thinks it is, but has just enough of all that to ensure it’ll sell posters and T-Shirts for years to come. It looks fine, it’s got a number of very entertaining and frightening movements, and if it had shaved 20 minutes off it’s running time, the detractors would have less to moan about. It doesn’t have anything that profound to say, except maybe about the benefits of socialised/affordable healthcare, but it can easily have a lot of things hung on it. It’s a good, solid, okay movie. Nothing more, nothing less. Liking it won’t turn you into the bogey man, and nor will disliking it. What is exceptional is that’s it’s been turned into such a touchstone event. Proving that marketing works, and on that level, the joke’s on us.