When this was announced as the movie of the week, three people went “Oh, I think I’ve seen this” and none of them could remember anything about it. That is what’s known in the business as “foreshadowing”, and it give a decent sense of how this Stuart Gordon directed film ended up. This is impressive, given that the last film of his we watched was absolutely blinding From Beyond.

It starts promisingly enough, with a bit of extreme violence introducing the bad guys to set the stakes and then a 70s US trucker aesthetic getting hammered into a spacefaring world to set to the tone. The world is an absolute explosion of colour, with a perfectly mid 90s neon-pastels palette, and little details that show where all the thought went into. Dennis Hopper plays “The Old Timer” with grizzled charisma, Stephen Dorff plays “The new buck” with fresh-faced charisma, and Debi Mazar plays “The love interest” with a green bra. Classic, time-honored tropes are brought out, polished to a shine, and then shown off to us to perfection so that we can absolutely understand “truckers, but in space”; somehow avoiding being dull and making us care about the people we meet. 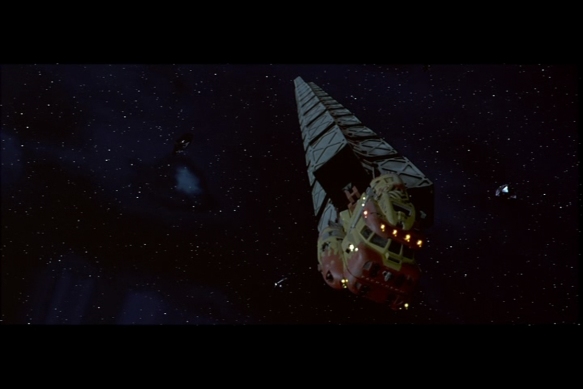 Things start to fall apart the moment act two happens and the cast flees the space police in a series of underwhelming hijinks, not just because the notion of space roads and driving chase vehicles off of them is one inherently dumb concept too far. With only the three stars in the truck/spaceship’s cabin, we begin to see that this film has no idea what it wants to be. The zero-G environment is played up to, both in small details with the spacesuits and unprecedented, grand sequences of snogging between Dorff and Mazar, suggesting it wants to be hard sci-fi, but the kookiness of wanting to stick to its trucker parallel keeps trying to shove it into fantasy mode. To add to the confusion, the overall tone is kept danger-free even whilst the Dodgy Cargo McGuffin is explicitly presented as a threat.

Deadly, except when inconvenient to the plot

Once Charles Dance turns up as a borged Captain Harlock, with his merry crew of charmingly inoffensive space bastards, the disarray is fully set in. The script fails to give us the lines needed for a comedy, the acting doesn’t convey the sense of urgency needed for it to be action, and the situation is dealt with to lightly to let the potential horror shine through. Similarly, Dorff and Mazar being stripped from the waist up for the bulk of the run time is never explored, her in the aforementioned shiny green top and him in some kind of space trucker cycling shorts, beyond a cursory “well, there they are”. They aren’t vulnerable, sexy, or really inconvenienced because of it. They’re just in their underwear and that’s that. 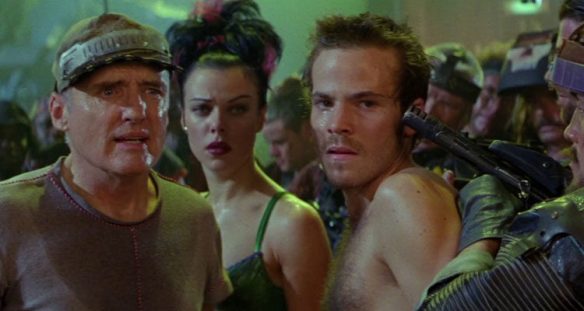 The best exemplar of the film’s core failing is Mazar being taken off by Dance to be assaulted in return for Hopper’s and Dorff’s lives. At no point does the film decide if a damn rape scene should be a terrifying experience or played for laughs, so it skirts around both and lands on neither. This isn’t the only plot point it does that with, but it’s one a film really should be able to make its mind up over or get it the hell out of the script. 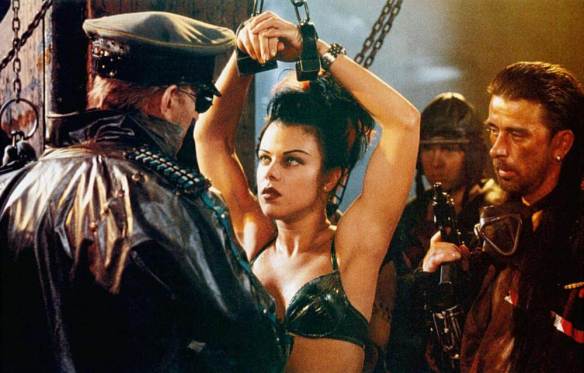 Eventually, with a lack of commitment to any genre other than “ooh, that looks pretty in an “70s-truckers-but-in-space” kind of way”, you end up not caring about what’s going on as everyone will be just fine. Moral quandaries get resolved in one or two lines and what could have been major plot points come and go in minutes, leaving only ghosts of importance. The aesthetic and the gimmick continue, the stakes stay significantly low-key so as not to disturb any audience members catching a nap, and it rolls into a nice and tidy ending so that you can go “well, that finished”. It’s then that you realise how many great ideas it pissed away and start wondering how amazing it could have been had it not been born so bland. 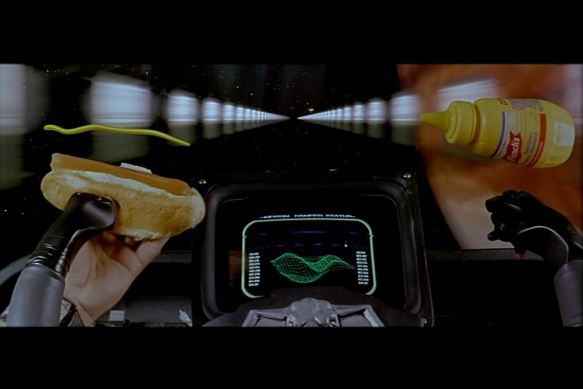 As said, it could have been a campy comedy, if it had committed to some decent lines and was willing to play more with the inherent silliness of its conceit. It could have been a spectacular sci-fi thriller, if it had bothered to read its own plot. It could even have been a relationship drama, smuggling true pathos and sentiment, if it understood human emotions on any level. Instead, it’s just a frustrating Trash heap is potential, and I’ll probably once again forget what small elements of that stood out