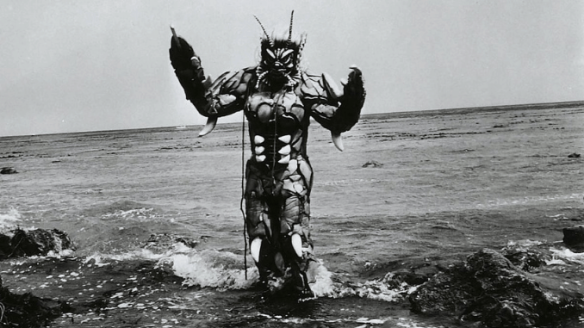 Giving recommendations on movies from the early part of cinema history is always a tricky thing, because they all have a similar aesthetic that can’t be avoided. For a start, due to a combination of technical restrictions and the shadow of the theatre, the pace is always slow to modern tastes. The visuals of sci-fi and horror were also far more constrained, partly to avoid the censor’s knife and partly as the audience would be disappointed if either saw them in the full eye of the camera. The result of this is that old black and white films often fall into the pigeonholes marked “artefact of genre history”, for those seeking enlightenment, or “kitsch novelty items”, for those who like a good eye roll. Both miss the point that these films can just be fun in their own right. The She-Creature, a 1965 B-Movie originally on a double bill with It Conquered the World, is a great example of this. It’s not a might perfect movie, now as then, but it certainly has charms to offer a willing audience.

Central to this is the bad guy, Dr Carlo Lombardi. Played by Chester Morris, and his amazing moustache, he is what the modern audience would call “an utter git of a man”. Not only has he placed the innocent Andrea Talbott (played by Marla English and a series of stunning dresses) under his control, but he is also using her powers to murder people. He starts with people that have annoyed him and ends with people that just happened to be there, like the git he is. Not only does he force Andrea to do the deeds with her strange gifts, but he basically tells the police he did it then goes “yeah, well, prove it!”. Again, like the git he is. Helped by the slightly less dickish Timothy Chappel, he also makes a fat bag of cash from books and stage performances of thrall. But that doesn’t stop him constantly sneering at everyone and everything around him. Honestly, you’ll just want to slap him.

Supporting this are various scenes that show off Andrea’s powers. Some of them are relatively mundane, such as the telekinetic moving of items obviously on bits of string. But the wisp-like manifestations of her psychic self has a delicate artistry to it, and the She Creature (a proto-woman summoned from the seas at the dawn of time) is impressively menacing. Yes, it mostly looks like someone in a lobster suit with a demon mask on, but who you wouldn’t want to meet on a dark night. The thing that really sells it is the victim’s reaction, as they quite clearly lose their minds at the horror of it. Similarly, the audiences of Andrea’s less destructive powers also tell a story. The idle rich marvel at her past life regression, and want to get on in the next hip thing, whilst the scientists just want to theorise how she moves objects with her mind. Telling responses, though probably not played as well as they could be. 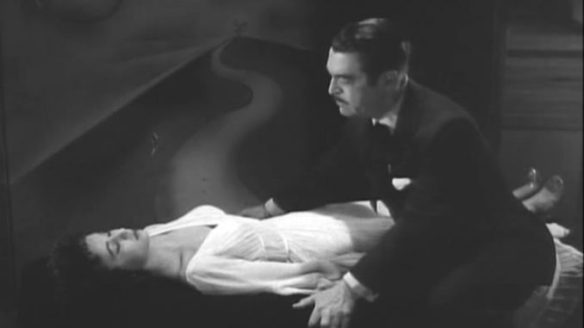 To be fair, a lot of it isn’t played as well as it could be, and if it weren’t for it’s sprightly 77 minutes running time you could probably get quite bored with it. The “hero” Dr Ted is a chin with concerned eyes, the similarly concerned Police establish they’re police by showing everyone their badge, and for some reason there’s a blink-and-you’ll-miss-it subplot about an ex-boyfriend going sober through the power of being asked to go away. There’s also a series of comic relief moments from the rich folks hired help, where the main gag is that they’re immigrants so can’t speak English all that well. Thankfully these are all shot past quite quickly so the film can get on with the meat of the matter; Dr Lombardi being a creepy git and people getting killed by a She-Creature!

For those who want to get all historic and cultured with their horror, there are also the ever-present links to the works of HP Lovecraft. This film touches on so many points of his Mythos, including the tensions of science to fantastical forces, hidden creatures in the seas, the unknowable rendering man senseless, and how annoying women and foreigners were to him. The fashionable story is that he was totally unknown until very sexy people rediscovered him in the 80s, but there is no way the creators of this film hadn’t been touched by his impact on American sci-fi. After all; although not a mainstem success, his works had appeared in popular magazines, like Amazing Stories and Weird Tales, and the reason he died penniless was more to do with him being an arse than no one reading his stuff.

So, if you are up for the ride, it’s a short and spiky little number that you can chew through with ease. It’s not perfect, but it certainly isn’t as bad as Mystery Science Theatre 3000 made out when they did an episode on it. The “of their time” bits are brief enough to not get you riled up, and the plot points that don’t add up are gone quicker than you can really get annoyed by them. It is daft, it is silly, but it is fun. And it really does have one of the gittiest bad guys of cinema in it. Ooooh, just thinking about him makes me want to slap his stupid moustache!