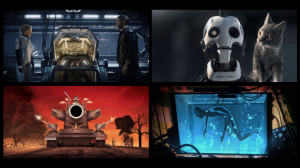 Anthologies are, by their very nature, a mixed bag, but Love, Death & Robots often feels like it’s an utterly random hodgepodge of stories and tones thrown together with no cohesive themes. To give you an idea, the first half opens with a solid 18-rated, by-the-numbers gore, and pseudo-sexy cyberpunk then skips to a charming little comedy about three robots taking a tour through the post-apocalypse, follows up with the way too long and far too exploitative Naked Woman Running In Terror sequence. It’s then on to a charming story of space farmers defending a homestead with mechs, tries to be serious with an 80s inspired Vampires vs Cats, hits another high note with a highly evocative social comedy about hyper-intelligent Yogurt and tails off with the double act of The Opening Of Aliens: Let’s Have Sex In Space, and Steampunk: Mystic Asia With Rich Europeans Being Terrible.

Whilst all of them are technically competent, with several being breathtakingly artistic, the three that are trying to play to the mature audiences – top-loaded into the first half of the run and the reason it got an 18 and sexualized violence warning – end up channeling the spirit of adolescent edgelordery and are likely to have driven away any viewers that want to watch something with a bit of intellectual or emotional subtlety to it. All feature extensively unsexy female nudity that goes well beyond the point where it’s needed, and all take relatively well-worn ideas and manage to outstay their welcome. The Witness is a prime example of exploitation cinema with 10 minutes of an avoidably nude woman fleeing in terror, and Sonnie’s Edge goes for the cliché double-whammy of “rape as woman’s main plot point” and (the only non-hetero bit in the whole series) “lesbians getting hot by talking about hetro-rape experiences”. The problem isn’t the basic stories aren’t interesting or couldn’t be done well with a less exploitative approach, but the way it’s presented feels like you’re supposed to be getting off on the visuals regardless of the story. Beyond The Aquila Rift is a prime example, as an emotional concept becomes an excuse for Space Tits, which gets slightly comedic due to everyone’s mouth movements being handled by a random number generator.

The male gaze overkill is further compounded as any clear view of penis (including a hunk running naked through the wilderness in a manner that would have mandated baby-oil and a slowmo if the genders were reversed) being avoided as much as possible, with the assistance of some puritanically hyper-kinetic editing, clunky camera shots, and back arching that’s going to result in a trip to the chiropractor. The most sustained penis shot is a “hilarious” example of old people’s genitalia being somehow innately funny, and phallus-aficionados (or just equal opportunity nudity proponents) are going to be left feeling highly un-catered for. Also, anyone looking for any kind of serious LGBTQ content or representation is going to be disappointed; maybe next time they will get to be more than two clichés and a sight gag. But, to hand out some progressive praise, at least there was plenty of gender equality, with almost no sexism, in job roles.

If you can get through the naffness quota of the first half – not something everyone from groups I am in has been able or bothered to do – then the majority of the stories are actually pretty good and the second half is consistently enjoyable. There’s some fine mixing of genres, a few brilliant war stories, and random spreading of thought-provoking and comedic turns. The absence of introductions and the directness of the action makes this feel like 2000ADs Future Shocks for a new generation, with Lucky 13 and The Secret Wars being solid bits of adventure yarn.

On the more experimental side of things, the Fish Night is a trippy little journey into a long-forgotten American landscape, The Ice Age blends live-action and computer animation into a world of hyper-evolved kitchen appliances, and Zima Blue probably hits the emotional high-point of the whole series by slowing things down and running a steady left-field play.

If only they hadn’t had heavily loaded up the first portion with excess, exploitation, and overkill… but they did, and pacing, combined with selection, are part of the art of the anthology, so it must be judged in that manner. Maybe next time they’ll get the balance right and not exhaust their own potential audience by opening with the dull over-application of grimdark, misery and misogyny hiding behind a thin veil of trying to be all grown up and serious. Until then, maximize your enjoyment by picking your episodes according to your tastes and tolerances, rather than binge watch, for maximum enjoyment.

Out of the 18 stories, I highly recommend the shorts Helping Hand, When The Yogurt Took Over, Three Robots and Zima Blue. The rest are fine, according to your genre tastes but you should consider skipping Beyond The Aquaila Rift, Sonnie’s Edge, The Witness and Good Hunting.